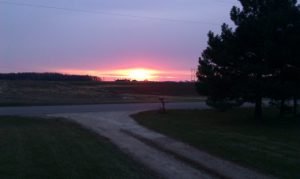 A cold summer wind is blowing out of the east this morning as the horizon brightens with twilight. Mrs. Accountant steps beside me and places her hand on the inside of my elbow. I bring my steaming mug of coffee to my lips, anticipating the scalding bitter liquid. I swallow. Heat radiates from my core. I take a deep breath and release it slowly. I am contemplating one of the most destructive forces to financial independence, a force that can strike anyone or any family at any time. The killer is silent. It sneaks up so quiet no one ever sees it coming. And for those unlucky few, it destroys all they hold most dear.

I returned from a long weekend at Camp Mustache to find a familiar problem in my office. One of my clients has an employee sinking deeper into the abyss of alcoholism. He explained how he greets each employee every day. His employee barely looks from his computer screen or says a word. He was hung over again. The problem had been growing for a few months now. The admitted he drank too much, but promised to cut back after he was assaulted and robbed when he had passed out from drinking. He was lucky he was not hurt worse or killed. 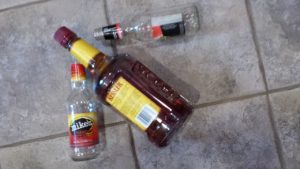 Performance is the first thing to go when drugs and alcohol sink their teeth into you. His performance was grinding down. My client encouraged him to seek treatment. He did start seeing a therapist, but instead of dealing with his issues he complained his employer was treating him too good; he must be up to something. He was right. He provided each of his employees with a company computer recently. How unfair is that?

The pattern was all too familiar. Alcoholics will say and do anything to keep the booze flowing. It certainly beats the alternative: dealing with the drinking issue. On several occasions the employer could smell stale booze on him. The smell is distinctive. After a bender the body metabolizes the alcohol and you can smell it on a person the next day.

He was not interested in solutions. The most important thing to an alcoholic is alcohol. He is 42 years old and reminds me of a client of mine from a decade ago. He ran a security business, installing electronic surveillance equipment for local police departments. Alcohol grabbed him hard and refused to let go. He eventually crashed and burned, losing everything. He lives on skid row now. Every year or so he shows up with a few questions. He waited so long the forced treatment program could not save him. Another talented soul lost to the bottle.

A family can organize an intervention. This individual’s family did not seem inclined to take such an action. An employer has few options. My client shared that he asked for a meeting with the employee so he could handle an additional project for the boss. He never acknowledged him. A few hours later he disappeared. He thought the employee was out to lunch. Instead, he had left for the day: no reason. The next day he called in sick. The employer assumed he was hung over yet again. It did not matter.

My client informed his employee he was terminating employment. His reaction and response indicated he never thought he would be fired. Alcoholics can be delusional. He returned his building key in a fit of anger and stormed out.

Help is on the Way

The employee no longer employed had lost a lot to alcohol: family issues, a broken marriage, an assault, and the loss of a job . He admits he passes out on occasion from drinking. The next time he may not be so lucky as to only be robbed. People have died over such foolish behavior.

This young man is not the first person lost to the bottle. I knew the guy, he is intelligent and talented. It bothers me he is throwing away so much. Before the bottle reasserted itself, he was on a fast track to a real professional career. My client had plans for this employee. His skill sets were promising in the repair industry where they worked. He recently qualified for some benefits and was scheduled for training that would increase his income substantially. Alcohol destroyed all that.

A tell-tale sign of an addict out of control is how they talk smack. Anyone suggesting they get help is a threat to their addiction so they engage in crazy talk. My client’s ex-employee suggested any offers of support had ulterior motives. It did. He treats his employees with great respect; I know this first hand from visiting his business. By providing unique incentives he created a better work environment and employee loyalty. Sure, he does nice things for his team, but he does it for a business purpose. The ex-employee will not receive any more incentives now that he is gone. On too many occasions he bad-mouthed his employer when picking up payroll. I knew it was bad.

Family has a powerful option when dealing with an addict: the intervention. Most families can’t handle the powerful emotions of an intervention. The addict will do and say anything to weasel out of the treatment option. Giving up the drug is the one thing they will refuse to do. Sure, they will promise to stop. They don’t. They need help, help they cannot find on their own. The ex-employee is very smart. As a result it will be harder than most to get him into treatment. His intelligence will work against him when it comes to treating his disease. Getting attacked only slowed him down for a short time. Losing family, a marriage, and a job has not been enough to get him to rock bottom where change would be a viable option. What will it take to bring this young man back from the abyss? I fear the option he needs does not exist. Sad.

Financial Independence is No Guarantee

Around here we talk about early retirement, financial independence (FI), and wealth building. The above story is relevant to people who have reached FI. Many early retirees rely on passive income to fund their lifestyle. Landlords have tenants who can go off the rails; small business owners can have employees who succumb to addiction; and anyone, even those smart with money, can lose a friend or family member to addiction.

We discussed the limited choices business owners have above and possible solutions to an intractable problem. Landlords are even more limited. A good paying tenant still has to go when addiction raises its head. Rent starts to come in late and damage to property makes the choice easy for the landlord. You can care about your tenants, but there is nothing you can do for them when addiction is involved. They have to leave.

Family and friends are a whole different matter. There are options, all of them hard. An addict will not stop on their own. They will lie, cheat, and steal to feed their habit. Everyone around them becomes their victim. You feed the destructive addiction by enabling the friend or family member; you could even lose your financial independence. If they refuse to enter a treatment program you are left with only one alternative: intervention. The emotions of an intervention are higher than you have ever experienced before. The addict may even walk from the intervention. They are truly lost then, without hope. At this stage you will need professional help. An experienced interventionist has a high success rate with getting addicts into treatment.

A cold summer wind blows from the east this morning. Dampness is in the air. Mrs. Accountant has her hand on the inside of my elbow. There is a bright flash on the horizon as the sun appears with the hope of a new day. I bring the steaming cup of bitter liquid to my lips and swallow. The warmth makes me shiver. I draw in a deep breath and release it slowly. Mrs. Accountant knows my mind is occupied. I lost another soul to the bottle.

I’m sorry Keith. Watching those you care about lose themselves to addiction is frustrating, sobering (to you, not them, sadly) and can piss you the hell off. Sharing your message helps all of us who have gone through the same.

[…] Addiction: The killer of financial independence […]

[…] Addiction: The killer of financial independence […]