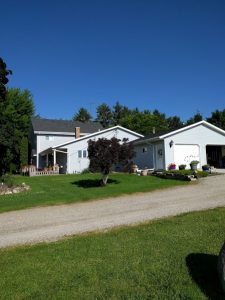 The shotgun shack has come a long way.

A cold north wind raised goose bumps on my forearms. The year is 1982. I am 18 years old with no idea how I am going to live my life. My dreams are to own a business and make lots of money. You see, my family is very poor. Just money. That is the goal.

The wind gusts, reinforcing the goose flesh. The family farm finished bankruptcy only months before. My whole life plan was over; farming is no longer a viable job opportunity, the only thing I know. Our farm house was a shotgun shack. (A shotgun shack is a building where you could shoot it with a shotgun and the pellets would pass through without hitting the building. The old farm house had plenty of holes.) By some miracle we kept the house and a few acres of land from creditors; the rest was gone.

My dad’s life was over, too. All he knew was farming and now the farm was gone. He started a business repairing silo unloaders. The competition was tough. Life in the 1982 Rust Belt was no fun. Work was scarce; opportunities few. Unemployment reached toward 20% in our local community.

The silo repair business, like all business, is hard. Finding clients is no easy task; potential customers trust the businesses they have hired for years and an upstart is a big risk. All you have is price and verve. You work hard for a song and hope to build trust so you have a chance in the future.

It is November 1982. The cold north wind knew the drama unfolding in the old shotgun shack of a once proud, hard-working family. All my dad had to ply his trade was an old van filled with used silo unloader parts. Every day my dad left the house, stopping at every farmer who had a blue silo, hoping for a repair job, any job; size did not matter. On this November day the journey was near its end. I heard my father talking with my mother. He had no money to give her to feed us kids; my brother was 13 at the time. I watched my dad hug my mother with tears in his eyes. Today was the last day; the end of the road. If he did not get a job there was not enough gas in the tank to get home. 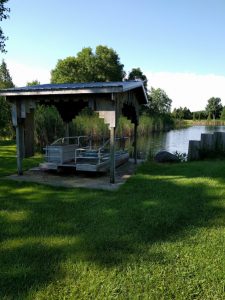 Life only gets easy after it is once hard.

My family never understood the meaning of quit. That fateful day my dad landed a small job replacing a chain link for $50. It was enough to fill the gas tank and live to fight another day. The anxiety I felt must have been acute. I don’t remember feeling anxiety, however. I remember feeling numb.

My concern was the upcoming winter. A shotgun shack in winter is cold and the furnace never stopped running. My upstairs bedroom had no heating ducts so I could keep ice cream under my bed in January without fear of it thawing.

The day that shaped my entire life more than any other was that fateful November day in 1982. I can’t get it out of my mind. It pushes me every day; a reminder of where we came from and how easy it is to slip back.

I would not be the man I am today if it were not for the plethora of gifts bestowed me all those years ago. Iron only becomes useful and strong when it is hammered. A vacant home will deteriorate faster than an occupied home. We either run from our fears to towards our greed. The more powerful is fear. The Great Depression defined a generation; the Great Recession will define this generation to a lesser extent.

Life lessons are commonly missed when times are good. It is the times of desperation where lessons taught are ingested and absorbed.

Too many people miss the important lesson: never quit until the fat lady sings. How often have we seen a football star make a great play, intercept the ball, running for the end zone only to celebrate and spike the ball at the one yard line? How many people quit after a half-hearted effort? 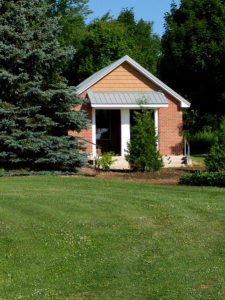 My parents are religious. They are building this chapel as an homage to Christ.

The very same dad (for some reason I only have one dad) experienced a travesty years later in his business. His business was doing great, income was up, and life was awesome. Then a lawsuit showed up. His insurance company declared bankruptcy at the same time. All the years of work were at risk in a large lawsuit without any insurance to defend him. Once again, dear ‘ol dad never quit. He fought and won.

Life is filled with trying moments. Business is even more trying. Some days you really do want to check out. It hurts too much. But some people, for some reason, refuse to quit. A few end up splattered because refusing to quit does not always work. But every business, every job, every toy and convenience we have, all is the result of someone or a group of someone’s saying, “I refuse to quit!”

Why do so many marriages fail? Why do successful business owners have a lower divorce rate? There are many reasons, but I think the ‘never quit’ attitude a successful business owner must have carries over into his personal life. When your personality type is to never stop trying, to always work for the things you value, you have a tendency to apply the same to your personal relationships. I don’t want a different business; I want the one I built. I don’t want a new woman; I want the one I married.

Finances are the same. A ‘never quit’ business owner has no choice but to save. The rainy days always show up in business and if you do not plan for them you fail. The windfall in business, unlike the unexpected refund for most non-business owners, is an opportunity to save and invest. Cutting costs is in the blood of a business-person. Socking money into retirement accounts, building equity in the business and home, are genetically bred into the business owner’s mind. 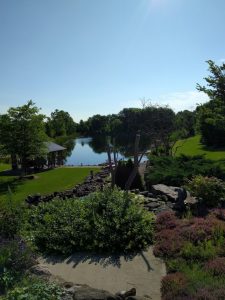 My dad never stopped building. Quitting is something he can’t do. Now he has an awesome fish pond, magnificent home, and a secluded shack at the back of his 15 acres as a reminder of where he came from. The shack is made of wood from the old barn.

You can have the same mindset without owning a business. Saving half your income is crazy talk to most people. Business owners frequently save 100% of a windfall. How much did you invest of your last refund check? Uh-huh.

The reason you do not think it is possible to cut your spending and save the majority of your income is because your life has been too good. When it hurts bad enough the lessons will become ingrained in your soul. You will make changes when you see no other option.

Some people do not know how to quit. Giving up is not in their language. There is a video of a man being interviewed with Warren Buffett. Buffett invested in the young man’s business a few years prior. This young man shared the greatest wisdom of the ages. He said “The genius thing we did was never quit.” Look at all the great leaders of our society. They all had a moment (many moments) where most people would check out. The winner never quit, because they do not know how to quit. They fight the good fight.

There are times I am accused of helping people too much. I have a soft spot for people who have been dealt a terrible hand. I think a woman should be allowed every opportunity to be a mother to her children, a man every opportunity to be a father. These down and out people are given a job or an opportunity to get back on track. Most accept the gift and fly; they end up friends and business partners. A few complain about my motives so I move on. I love sharing and helping. That is why I am in a service business. My motives are clear; I want more winners

I also challenge people. Deep down I know giving someone a gift rarely helps; it is more likely to enable. So I poke and prod until the irritation motivates to action. Those who check out end up the failures of life, the lost souls of our generation. Those who spit back the hardest finally learn to fight on their own. I call them fellow business owners and financially independent friends. Most show up years later at my office to tell me ‘Thank you.’ It is then I know I have a new friend who understands what it means to never quit; to win.