There is no surprise around here I am an accountant. Before the dream of accounting set in my dream was to write for a living. My first novel was finished in high school and my second shortly thereafter, neither published. Writing was in my blood. There was only one little problem; writing does not always pay the bills. The internet changed all that.

Starting in the mid 90s a new company showed up making it easier to sell books: Amazon. Behind my office building was a company called Banta, the seventh largest book packager in the country at the time. RR Donnelley bought them out years ago. It was now easy to produce and sell books on Amazon. I jumped on hundreds of radio talk shows to hawk my wares. I wrote about everything that tickled my fancy. And I got my first taste of money from my writing skills (or lack, thereof).

Editing and production takes a lot of time, time I could be writing. Several years later content farms showed up online, eliminating most production time issues. I eventually settled into HubPages for a few years, publishing over 100 articles. In December 2009 and again in January 2010 I wrote about Tony Robbins. The articles have produced a small but steady stream of traffic and income over the years. Recently the traffic spiked and I did not know why. Research indicated Tony was in the news because some people were burned in his fire walk seminar. Traffic returned to normal after the new cycle ebbed. Now it is rocketing again due to a Netflix documentary. I guess now would be a good time to revisit our favorite promoter.

I discovered Tony Robbins back when his Personal Power program was all the rage. We are talking twenty years now. A real estate agent introduced me to Tony and invited me to several of his free seminars. I was tight with money so I refused to pay for Tony’s programs. The only thing I ever bought from Tony was his Personal Power tapes and Power Talk program.

At one of these free seminars in Chicago I actually met Tony Robbins personally. It was a brief encounter, but it made a lasting impression. His energy and enthusiasm was intoxicating; he knew how to motivate people into action.

My real estate buddy attended several expensive Robbins seminars. It was easy for me to see the pattern. Once you attend a Tony Robbins seminar you are now prime material for promoting more expensive seminars. Remember, the Date with Destiny seminar costs $4,995 or $6,995 (if you want to feel special) for the one-week program: travel, food, and hotel not included. I am sure it is worth every penny just for the entertainment value. My money is still staying in my pocket. 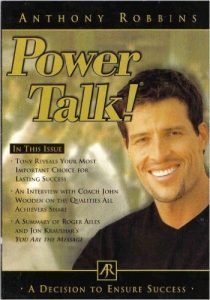 The Hero in Tony Robbins

My impression is Tony Robbins really wants to help people. He has developed methods to convince people to break free from their fears. The number of people helped by Robbins is significant and cannot be understated. By combining showmanship with training, Robbins creates an environment where people are so enthused they want to take action on the spot, sometimes even jumping before they look.

My personal opinion of Robbins is that his heart is in the right place. He helps people who have struggled with abuse for decades. He also helps people put their romantic and family relationships in perspective so they can grow. Business owners benefit from the motivation to take action now. Many people get their money’s worth if they are motivated into action. As with so many things in life, you need to get off your ass before you get results.

I could go on about how great a guy Tony is, but he does that very well himself.

The Fraud in Tony Robbins

Before we begin with the concerns about Robbins and his practices, understand I do not consider him a fraud; I view him as a master marketer selling as much as he can. Robbins believes in his products even if it is self-serving. Robbins has a well practiced skill at motivating people into action; the action he motivates people to do is buy more of his stuff. Normally, I would have no problem with this, but the skills he has and teaches gives him an unfair advantage. When people are most hyped (and vulnerable) his team goes into action selling more expensive programs. Too often, people are spending their life savings for regular motivation. It is really entertainment; expensive entertainment, but entertainment all the same.

Knowledge can be used for good or evil. Robbins is a showman. He is fun to watch. A lot of people want to have his ability to manipulate (did I say that) people around them. We all do it at some level; we are only less practiced at it. I am familiar with neuro-linguistic programming (NLP) as Robbins teaches it. When a client walks into my office and shakes my hand I can tell if he has attended a Robbins NLP training program. Neat trick, but Jedi mind tricks don’t work on me, you fool.

There are few fads Robbins misses. He clings to a lot of ideas that seem crazy to me. His health, fitness, and diet ideas can get extreme. It also feels like his advice is designed to sell you more crap: supplements or exercise equipment. All this stuff is great to review, but very expensive to implement. Around here we know you can live a healthy, happy, productive life with only a small amount of spending.

Finally, we get to the meat of the problem with Robbins. He gets himself in trouble on this stuff from time to time. A decade ago he had some serious legal issues due to his business practices. Sometimes thinking is required before you take action, no matter how motivated you are.

The constant up-sell is annoying. Even attending a free seminar introduced me to the Tony Robbins selling machine. I witnessed firsthand from my real estate buddy how fast people will open their wallet in the vicinity of a master. 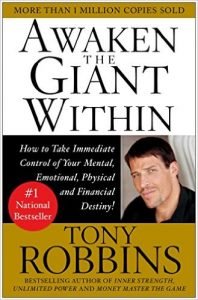 There is a bit of Tony Robbins in me. I tell stories, just like Tony, when writing and speaking. I do it with energy and excitement, just like Tony. And most people want what I have to sell when I use these talents, just like Tony. It is a nice set of skills to have. The truth is it is all a mindset. People tend to follow me (and Tony) because they love the feeling excitement and true dedication brings. They want to feel alive.

This is a personal finance blog so we need to clear the air. Tony Robbins can motivate you to take massive action to build wealth. His method of wealth creation is to earn and spend like a Wildman. I disagree with his method. The wheels fall off too easy. The answer is simple: save half your income; invest it in a broad-based index fund like the S&P 500. Now you can go out and play.

I will recommend one Tony Robbins product. (Here comes the up-sell. Waaaaatch for it. Look at Keith work his magic.) Robbins’s Personal Power program is awesome. I listened to is many times in my formative years. When Mrs. Accountant and I had foster children it was required listening for the kids. It made a difference.

Now go out there and get something done! Or, you can sit back and enjoy the day knowing your soldiers of fortune are working hard inside that index fund. The choice is yours.

I was a fan of him and his material until I learned that NLP provides a basis for his teachings. Thank God I did not click on "purchase" years ago when I desperately wanted to attend an UPW event!

Agreed. I have learned a lot from him. Especially about how to get myself motivated, how to change habits for the better, and how to establish a productive morning routine. "Hour of Power." But his investment advice? Yuck. Contradictory and filled with conflicts of interests.

I happened to stumble across this documentary this weekend and began watching it. I had to stop. When he forced a young girl to call her father after only speaking with her for about 40 seconds (or so it seems on the show). You cannot know in that time what that father can do... or daughter to the father. When he forced a lady to break up with her boyfriend. He cannot know in those same 40 seconds what that man provided that lady and vice-versa. I was so horrified with the show and spoke so ill about it this weekend that my husband send me this article this morning more as a joke.

But, life is NOT a joke. And there are serious implications to what this man is doing to very vulnerable people. And this is the same relationship with what financial advisers can also do to you if you are uninformed and vulnerable.

READ. LEARN. Make sure you make your own decisions. This is likely in that program Tony sells... but I refuse to engage with any part of him after what I saw.

Needless to say, though many people are attracted to his ways, Tony is also very good at repelling other people.

I agree with most of your assessment. Tony's heart is in the right place, but he's also trying to make money in the process which can lead to compromises (whether real or perceived). Having been to an event I wouldn't necessarily call it "entertainment", as many people use that as a springboard to make life improving decisions. I can point to one decision made at that event that returned more than 10X the price of admission in my bank account. That said, one could get the same or similar results for much less by reading books, watching videos, or surrounding yourself with the right people if you've already got the spark inside of you.