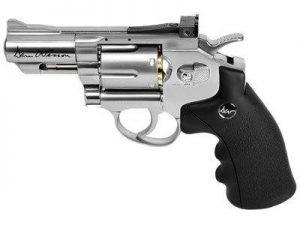 A CO2 Air Pistol might be a cheaper alternative for target practice and easier on the wallet. Click the image for more information.

Life started poor in my household. No grand inheritance (no inheritance, period) to give me a lift off into adulthood. Sheer hard work, determination, and persistence led to gradual wealth accumulation. Soon the numbers started to grow. Money started pouring in faster than my young mind could imagine. The stock market was on fire so my investments made me dizzy and scared it might crash (it did in 1987). I had to protect my future by diversifying into alternative investments since the stock market was so high.

My dad is a gun nut and loves going to gun auctions. Somewhere around 1990 he convinced me to join him. He encouraged me to buy a gun. Personally, I don’t care for guns. I have no problem with you owning a gun; I just don’t feel a compelling need to own a firearm myself. He kept pressing the issue. A gun is useful against marauding hoards, the government, and the impending apocalypse. I still stood my ground.

Nobody knows you like family and my dad knew me. He played his ace card. “A gun is a great investment. Never goes down in value.”

What the hell do I know about guns and their value? I made the mistake of trusting someone else to make an investment decision for me. A beautiful new AK-47 was next on the block. I ended up owning that powerful weapon. I took my investment home and fired a few rounds. The weapon had a nice feel. No real kick back and powerful as all fuck. You could hurt somebody with this damn thing, especially the wallet; ammo for the AK was a couple bucks a pull.

Dumbest Investment I Ever Made

I dropped $1,200 that fine Sunday afternoon for my AK-47 at the Fond du Lac gun show. I did not plan on wasting money shooting it after I got the initial thrill of firing an AK-47 out of my system. I packed the gun away in a safe place so no one could accidentally get hurt with it.

Years went by. The few guns I owned were rarely used, but I was comfortable knowing the value was always going up as dad promised guns always do. Recently I decided to engage in a downsizing program and sell all stuff I never used and invest the proceeds into an index fund. The goal was to simplify life with fewer things. I did some research on my guns and discovered my AK-47 was selling for under a thousand dollars! That had to be wrong. Some AK-47s went for more, but my model was not. I asked around and discovered my research was accurate; my gun lost value! I made a stupid investment and was now going to pay the ‘stupid tax’.

The more I thought about it I realized guns are always a bad investment. There are so many guns in the United States there was only one direction for prices to go: down. If prices tick up a little the manufacturers crank out more until there is no profit left to be made. Worse, if I decided to shoot the damn thing I would go broke faster. A day at the shooting range is not cheap. AK-47 ammo is really expensive compared to most firearms.

Only Poor People Own Guns

Then I started thinking about the gun debate we have in this country and all the financial problems we have. It dawned on me most gun owners are poor as dirt. Not all, but most. Wealthy people may own a gun or two, but the real gun nuts yammering about their Second Amendment rights, are mostly poor people.

I come from a family of gun owners and have heard all the arguments. For some reason people believe their guns are being taken away from them when there are more guns than ever before. If the government is taking your gun away they are doing a piss-poor job of it. The only way we could get more guns in the hands of people in the United States is to mail every household a package of guns as part of the next stimulus package.

The arguments over gun rights are not what this post is about. Around here we talk about wealth accumulation and preservation. With all the guns in America I start to wonder how much extra money people could have in their retirement account if they did not waste their money on guns and ammo. Guns ain’t cheap and every time you pull the trigger your net worth drops. Dumb! 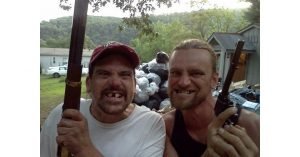 Put aside the statistics that gun owners are more likely to be a victim of gun violence. Let’s assume there is no gun violence ever. By working in a vacuum we can see how much damage your gun purchase did to your wealth. I used a simple online S&P 500 index calculator to give me some results. I dropped $1,200 back around January 1990. Invested in the index fund my $1,200 would have generated a 9.368% annual return with dividends reinvested for a total return of 972.859%. My original $1,200 would now be worth $11,674 rounded to the nearest dollar. The current annual dividend would be over $200 per year! The results are clear; buying a gun was the stupidest thing I did.

Before you jump in and claim I had a weapon to protect my family if an intruder broke in, sorry. No intruders over the last 25 years. Hell, even if there was, the gun was locked away to protect the family. It would have been no good if there was an intruder.

At least the weapon is gone now. I stopped the bleeding. Thank whatever god there is I did not get the itch to show off and take up target practice. Then I would really be screwed. Imagine a $100 per month hobby of target practice. The cost to my net worth would have been enormous! The dividends lost alone would easily be over a thousand dollars per year, more than the original cost of the gun.

It is only my intuition, but it seems right when I examine the facts. When I review gun ownership in America it appears the poorest places have the most guns. I get it. You want to protect your stuff. But if you are so poor what the hell are you protecting? The only thing you own of value is the gun you are holding, and like an automobile, it is a depreciating asset. As for protection, I would rather run like the wind the stand in a firefight. I am not John Wayne; neither are you.  Killing someone would destroy my life; I could not deal with it. I would rather run like the wind than fight and kill or be killed. In such a situation I would lose regardless. If you are of good conscious you feel the same. Killing is not something to take lightly.

Guns are a terrible investment. If you own a gun I have nothing against you. Rural folks use guns for a variety of acceptable reasons. Certain vermin need to be shot to protect your property; I get it. I trap like crazy to protect my farm animals. Guns for hunting also make sense to me. Target practice is understandable if you hunt or shoot vermin around your farm.

People yammer about their Second Amendment rights ad nauseam. What confuses me is they pay no attention to the rest of their rights. It is almost as if they have been brainwashed into supporting a select agenda. Does anyone know what their Seventh Amendment rights are? If The Second is so important you must be aware of the other rights, right? No?

I propose we take a different approach. A few less guns will not, ahem, kill anyone. We could take this tidy sum and invest it into an index fund. All the extra money you have from not owning guns and buying ammo will do more to protect you and your family than owning a gun ever will.

Gun ownership creates strong feelings in many people, pro and con. Feel free to share your ideas in the comment section below. Always remember to be civil. This is not the O.K. Corral.

Of course, you can enlighten all your gun crazy friends by sharing this article with them. Just a suggestion for your entertainment.

"AK47 ammo is really expensive compared to most firearms." This statement is downright false, and the rest of your article is extremely misleading. It never fails to amaze me how everyone is an expert on every topic these days and that people will literally write on a blog, state "I don't care for guns" then continue on to give an explanation of why the "second amendment is destroying your financial independence." AK ammo (also known as 7.62x39) is the cheapest ammo in the world second only to .22. Its mass produced in places like Russia and distributed all over the world. The AK47 itself is the most widely used weapon in the world, due to how cheap it is to acquire and use. Currently you can buy an entire sealed can of 640 rounds for about 160 bucks. You also admittedly bought the rifle in the early 1990s, right as the Clinton assault weapons ban went into effect, driving the price of "assault weapons" higher, and then sold it "recently" and definitely after the expiration of the ban which occurred in 2004 which lowered the price of AKs from thousands of dollars to 5-600 bucks. There was no difference in you buying a rifle and losing money selling it than you buying a stock and selling it for a loss, except I would think you have a better understanding of the stock market than the gun market and the politics that surround the gun market. About 6 years ago I bought 5 Mosin-Nagant rifles for 90 bucks each at a gun show, and people literally make a living every day by buying and selling guns. Today those same rifles go for around 300 bucks. Your mistake was you didn't understand the market in which you invested, and learned a lesson the hard way. I will agree that you would have been substantially better off to have skipped this particular gun purchase and invested the money in the market from the beginning. Your mistake was buying high (due to the limited supply of AKs at that time) and selling low (after the assault weapons ban expired.) I think the fundamental reasoning of your article is spot on, but your reasoning to get to your point is misleading at best.

Wealthy Accountant, you have such a positive and enlightening perspective. Thank you for saving me money and making me aware of my other rights.

Preservation of a right does not require one to participate in or exercise that right. So it is false that the 2nd Amendment (or any right) in and of itself is destroying your financial freedom.

What is killing financial freedom is the perspective that considers any depreciating item as an investment. Bad decisions and purchases of items where you are at a information disadvantage and overpay are killing your financial freedom.

Yes, I agree. It drives me mad when people call their cars an investment. I've been unfortunate to see an advertisement for home appliances insurance encouraging people to protect their investment of washers and dryers and even their TV! Our collective lack of understanding of basic financial terms like, "investment" enslaves us to poor decisions and life-long payments for insuring depreciating assets and worse the interest we pay on their loans.