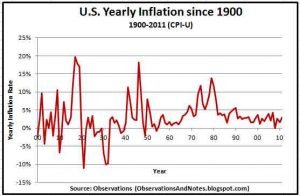 Media continually warns of impending inflation due to all the money printing by central banks around the world. The concern is real. If inflation spikes bonds will suffer massive loses and stocks will also suffer a painful decline. It is past time we look at the facts about inflation, how fast it rises, and what causes prices to spike.

Planning for retirement and when reviewing investments, inflation is a consideration. A review of historical inflation data will help in the decision-making process. By reviewing the historical data also clearly shows why inflation accelerates, including solutions to protect yourself. We will focus on inflation data in the U.S. I have reviewed price data for other countries and further back than the U.S. data. The conclusions are the same.

Paul Volcker at the Federal Reserve and President Reagan applied a two-prong approach. Volcker raised interest rates to kill inflation and Reagan pushed supply-side economics through Congress, providing tax incentives for businesses to ramp up production. It took time to steady the economy, but within two years inflation was down and the economy was humming.

Supply-side economics has been in vogue since the success of the early 1980s. Unfortunately, the medicine required by the economy back then is different from today. Supply-side policies puts downward pressure on prices as it encourages more production. The economy today needs the incentive of mild inflation. Worldwide production potential will keep a lid on prices for the foreseeable future. As much as we all like tax cuts, they will not salve the woes of low inflation or deflation. Supply-side policies have gone as far as they can and may do more harm than good if pushed further.

Where Did All the Money Go?

If central banks around the world have printed so much money, where has it gone? Trillions of dollars, euros, yen, et cetera, should have caused massive price increases. The reason inflation has not accelerated is because most of the money printed sits in bank vaults of money center banks and at central banks around the world. The additional money created was used to improve balance sheets of banks. Money not in the system cannot cause inflation. You can see this in the velocity of money numbers. Historically each dollar changed hands about 16 times per year. That number is now around 4, lower than during the Great Depression. If velocity increases to historical norms inflation is sure to follow since the Federal Reserve increased their balance sheet from $800 billion to $4.5 trillion. 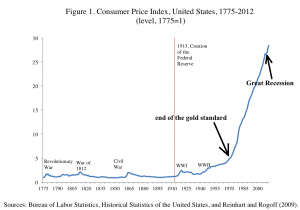 Prices have fluctuated wildly in the past, oscillating between bouts of inflation followed by gut-wrenching deflation. The illusion of modest price increases over long periods of time is recent. The bout of inflation in the 1970s was not followed by deflation until now, 35 years later. Inflation has remained steady under 4% for most of the last 35 years.

Price changes tend to be orderly under normal circumstances. It takes a shock to the system to send prices rocketing higher. The backside of an inflationary spiral is a deflationary period allowing prices to find an equilibrium. The recent deflation in the U.S. is mild compared to price declines of a century ago.

Official inflation records began in 1913 in the United States. The numbers I use here are the change in prices from the same month the prior year. I’ll start at the beginning. The U.S. decided to start tracking prices due to inflation caused by World War I. In September of 1915 there was mild deflation at -1.0%. By October 1916 inflation reached double digits at 10.8%. In April of 1917 the U.S. entered WWI with inflation hitting 20.4% in June of that year. Then the war ended and the expected deflation arrived. It took a while for inflation pressures to subside. Inflation for 1920 was still a whopping 15.6% as the returning troops increased demand for consumer goods. The next year prices declined 10.5% followed by a 6.1% reduction in prices of goods and services in 1922.

The remainder of the 1920s inflation picture in the U.S. looks a lot like the last decade of price changes today. Inflation in the U.S. from 1923 to 1929 was modest; 1925 had the largest price change with inflation at 2.3%. 1925 was the only year with no month of data showing deflation during the 1920s. 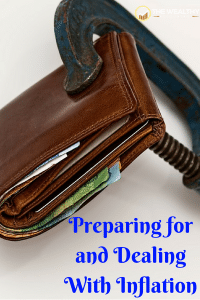 The shock of the Great Depression kept prices falling. It took until WWII for inflation to make any kind of showing. WWII had inflation, but the real inflation came after the war, similar to WWI, when the troops returned home and ramped up demand. 1947 saw 14.4% inflation.

The 1950s and 60s were a time of modest price changes. The difference was the lack of any real deflation after WWII. Cumulative price increases became large as prices never adjusted back down due to the Federal Reserve providing additional liquidity to the system. This was done out of fear the Great Depression would resume after WWII spending ended. The recession of the early 1950s only pushed prices lower from September 1954 to August 1955. Vietnam War spending caused inflation worries toward the end of the 1960s.

The money supply growth, government borrowing, and Vietnam War spending only caused 5-6% inflation in the early 1970s. It took a shock to the system to ignite the inflation most readers are familiar with. The first oil embargo pushed consumer prices up 11.0% in 1974. Inflation pressures soon eased to 4.9% in November 1976. The second oil embargo reinforced the inflation pressures supported by past government money printing, borrowing, and spending. Double digit inflation for calendar years 1979-1981, were the worst since WWI at 11.3%, 13.5%, and 10.3% respectively.

That is where we came into this story. Fed Chairman Volcker and President Reagan broke inflation and stagnant economic growth with their one-two punch and for 35 years we have seen declining inflation and lower interest rates. Never have prices been so stable since records began in the U.S.

We fear deflation—and rightfully so—even having never experienced serious deflation in our lifetimes (unless you are a very old reader). Inflation pressures have not ignited for a long time. The charts on this page clearly show we are lucky to be living in such stable economic times. Those times could be ending soon and here is why.

The Rise of Inflation

Prices bounce around modestly as sellers try to get more for their goods and services and buyers try to get the best value for their money. Inflation arises when buyers become scared good and services will not be freely available in the future or the price will likely be higher later. This causes an inflationary spiral. It takes more than a nudge to get inflation feeding on itself. War is the biggest catalyst of previous inflation. Even the 1970s inflation sparked by the OPEC oil embargos was fueled by a decade of massive government military spending.

Your investment portfolio counts on prices remaining relatively stable. Slight inflation, say the Federal Reserve’s 2% target, seems to be a Goldilocks zone for maximizing economic growth incentives for businesses and consumers. Slight deflation is more painful than slight inflation as even modest price declines quickly feed into a ‘wait until tomorrow’ attitude for buying.

The real question centers on how to determine when inflation will rear its ugly head again and the steps necessary to protect your net worth from the consequences. Past bouts of inflation provide valuable lessons. Deflation of -1.0% in September 1915 turned into double digit inflation in thirteen months. WWII had similar results. The 1960s saw inflation pressures building slowly without a spike in prices; the inflation was annoying, but not destabilizing. Annual inflation in 1972 was 3.2%, by 1974 it reached 12.3%.

The lesson to learn is that inflation, when it happens, happens fast and then burns itself out after a few years as consumers lack the money to keep pushing prices higher. This time could be different as the amount of money created is larger than any time in modern history. Out of control money printing reminds us of Germany between the wars or Zimbabwe. I am unable to find any instance where a world power, along with most of the rest of the world, engaged in such massive money creation.

One thing is certain, inflation will come again. Will Durant, the great American philosopher, said history is inflationary. My research affirms his statement. Inflation has a tendency to recur. We are overdue. All the pieces are in place for a massive inflation spike. All we need now is a spark. 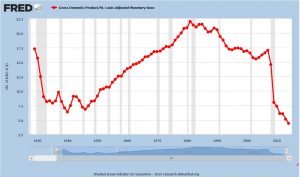 When you see the spark ignite the first one out the door wins; the rest get trampled. Bonds will get killed in an environment of rising prices. Stocks suffer, too. Until Chicken Little starts screaming about the sky, index funds are about the only game in town. Inflation, when it returns, will require a powerful response from central banks. Moving money from equities to short-term bonds of safe sovereign debt when inflation returns is the only alternative until price begin to ease and equities are the place to be again. Or you can ride out the storm in equities. Companies will bust tail to protect their interests. The stock price will not reflect all the value created by companies, but the dividend yield should expand, providing ample cover until the dust settles.

Perhaps the only choice is an index fund and wait. Nobody can predict the next inflation outbreak until it is well on its way and then it is too late. Since businesses will protect their interests, and hence investor’s interests, it is best to keep your money with the largest and most successful enterprises on the planet.

Side Hustle Selling tradelines yields a high return compared to time invested, as much as $1,000 per hour. The tradeline company I use is Tradeline Supply Company. Let Darren know you are from The Wealthy Accountant for a bonus. Call 888-844-8910, email Darren@TradelineSupply.com or read my review.

Amazon is a good way to control costs by comparison shopping. The cost of a product includes travel to the store. When you start a shopping trip to Amazon here it also supports this blog. Thank you very much!

Very good article, thank you for the profound analysis. Question: let's say I expect inflation to spike up for the next few years, wouldn't buying a house with mortgage and longterm fixed interest rate be a backup too? In this case, the debt would stay the same and therefore the interest I have to pay too. Because nominal, fixed prices devaluate with rising inflation, this should win in such circumstances. Just wondering.

The Minimum Wage and Inflation | The Wealthy Accountant

[…] I’ve argued in the past on the reasons why all the money printing around the world didn’t cause runaway inflation. In short, much of the newly created money never entered the economy. Money center banks and central banks around the world stuffed their vaults with digital cash. It made the books look better so banks could lend if necessary. The result? The economy limped slowly out of the Great Recession in fits and starts, but finally grew to record length proportions. It’s been a long recovery and new heights have been reached. […]

Could We Get a Single Digit P/E Ratio? | The Wealthy Accountant

[…] This may seem strange to people living in a world of remarkable stable prices. But that could all ch… […]

[…] rates and inflation are still low. That can change fast. As the massive quantities of money finds its way into the general economy from bank vaults and as […]