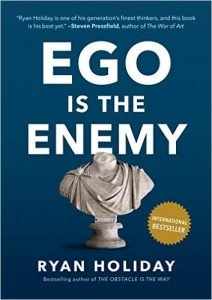 Ryan Holiday has come a long way since writing Trust Me, I’m Lying: The Tactics and Confessions of a Media Manipulator. From his personal experience and stories of great men and women from today and in history, Holiday outlines how the ego gets in the way of aspirations, success, and even failure in his latest book: Ego Is the Enemy. This book is a guide on how to live life well with a healthy dose of Stoic philosophy so you can live happily too.

This is the best book I’ve read on living right since reading A Guide to the Good Life: The Ancient Art of Stoic Joy. From the beginning to the end Holiday provides example after example of how ego has harmed great men and women over the ages. He also gives examples of ego as it applies to aspirations and success. Holiday is not afraid to expand the narrative to include his own failures in life, bringing a personal touch to the lessons taught.

At 29, Ryan Holiday has lived an eventful life filled with awesome successes and fantastic failures. His drive and understanding of human nature allowed him to become a massive success at a young age. He worked with Tucker Max, using reverse psychology to create controversy and hence, sales. Next he worked with Robert Greene, author of The 48 Laws of Power, and other authors such as Timothy Ferris and Tony Robbins.

In the past Holiday used his talents to create controversy around a product or book to bring attention and sales to the product. His uncanny ability to understand the media world we live in today has made him a master of the trade. He has used underhanded methods of manipulating the media in the past to generate buzz. Billboards and press releases are not effective anymore according to Holiday. Getting the media coverage needed to sell a book or a company requires manipulating blogs, both large and small.

There is a tinge of regret in the tone of Holiday as he gives examples of aspirations, success, and inevitable failures in life. His prolific reading and writing makes his storytelling hard to put down. Each story has you nodding your head as you see a piece of yourself in the mirror. Heavy Stoic teachings are woven into the narrative so you can take the lesson taught and apply it in your life, creating happiness without anxiety or worry.

Ego Is the Enemy is a blueprint to avoid the failures of great leaders from the past. The lessons learned can help us lead a happier life without feelings of revenge, regret, or envy. By accepting you have enough you can put ego aside and live life for what it is worth.

Holiday watched up close and personal the destruction of an American company: American Apparel. The founder, Dov Charney, disintegrated before Holiday’s eyes while he worked as the Director of Marketing for the firm.  Lawsuits began to unravel a fashion empire. The in-fighting and recriminations grew in intensity. Charney could not let it go. Instead of practicing a Stoic mindset or taking honest advice, he doubled down, then tripled down on failed policies. Eventually he was fired from his own company. He filed lawsuits against American Apparel, the former CFO, and multiple board members. By the time the fighting was done the company was gone.

Ryan Holiday was there to see American Apparel fail. He advised Charney, but Charney was in no mode for sound advice. Steve Jobs lost his company in a similar fashion, but took the opportunity to self-reflect and grow. Steve Jobs was hurt when he was ousted from Apple by the board; Charney destroyed the company in an avalanche of lawsuits so there will not be a company to come back to.

No matter how hard we try, no matter how good we are, regardless out intentions, there will be times when things go very wrong. Defeat does not define us, how we handle defeat does. Bad things happen to everyone. Preparing mentally for these difficult times starts now, when we are able to think clearly and can condition our minds to handle tragedy.

Ego is in every one of us. Ego wants to assert itself at the worst possible moments, when our pride is wounded and we want to control things we have no control over. Ego Is the Enemy illustrates the successes and failures others have experienced and provides solutions to destructive ego issues.

One of the most moving stories in the book is about Katherine Graham, the remarkable woman who ran The Washington Post for over two decades. Graham faced hardships most people would be crushed by. Graham was born into wealth and privilege and was unprepared for the hardships she would endure. Her husband ran the family newspaper until she discovered he was having an affair. He later committed suicide leaving her in control of a business with thousands of employees and no training or experience to run a company.

Family and advisors told her to sell The Washington Post and use the money to retire to a comfortable life. She could not do it. Her father started the business and she wanted it to succeed. The challenges got worse. She managed The Post through the Watergate scandal. When the board and advisors told her not to publish confidential documents she did anyway. The President of the United States made it a project to punish her for her audacity.

The Washington Post was the first Wikileaks and Graham the first Julian Assange. There is a price to pay when doing the right thing. A President was exposed and brought to his knees, but before the smoke cleared a crippling strike brought The Washington Post to the edge as millions in advertising revenue was lost. If this wasn’t enough an outside investor was buying shares of the company; Graham could be facing a struggle for control of her company.

The strike ended and The Washington Post won a Pulitzer Prize for journalistic reporting. The outside investor was no other than a young Warren Buffett. Buffett mentored Graham as they built the newspaper into the powerhouse it is today, even in an environment where newspapers are dying.

How can we have the same fortitude and toughness of a Katherine Graham? Is there anything special about people who face defeat in life and use the opportunity to excel? Without knowing it, Graham had a Stoic determination. Most winners in the world possess the same attitudes. Here are some final thoughts before you borrow a copy of Ego is the Enemy from the library: