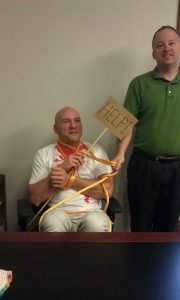 When the boss misbehaves he gets tied up. Karen, the office manager, was out that day.

Leadership is a skill far beyond bossing people around and delegating workload. Leadership skills take years to develop with careful grooming to prepare for the day you step into the leadership role. We think of leaders as politicians or business owners, but we all take leadership roles in our daily life. Parents are leaders of their children for good or bad. Cultivating the most desired traits of a great leader in ourselves allows us to make a difference in the world around us in a positive way. Without these traits you can lead you and your followers off a cliff.

Many years ago I had a CPA employee who wanted a management position so bad it hurt. I was dubious of his leadership ability but he had a decade of experience with me and he was due for a promotion. My fears came true immediately. The CPA emptied his desk on everyone else and bitched at the entire staff for not performing while he sat at his desk watching the stock market all day. His tenure as a manager was over before it began. As a leader I know the characteristics of good leaders. Bossing people around is not one of the desired characteristics.

Bad leaders are easy to spot. We point out the flaws of our elected officials and sports figures. We also notice awesome leaders like Bill Gates or Steve Jobs. Their great leadership skills are hard to pinpoint because they make it look so easy. Take Steve Jobs as an example. He started a company that in his short lifetime became one of the biggest and most profitable companies before his death. Yet, when we analyze his leadership skills we sometimes think of his short fuse and how he treated people poorly. He may have done these less than desirable things, but he also instilled admiration and respect. Jobs’s abusive behavior must have taken second seat to his ability to inspire people to their best or he would never have accomplished as much as he did.

Leaders delegate and push their people hard to reach difficult goals while maintaining a sense of decency. Leaders do get angry and demanding; it is part of the job description. Sometimes they hurt feelings and fire people. Also part of the job. A leader does the hard things because that is what good leaders do. One person’s rights don’t supersede the rights of the group. Making a judgment call when you know the decision will cause pain and suffering takes all the skills a good leader has. Poor leaders stand with their hands in their pockets while the world burns around them.

Here are some traits we need to cultivate in our life so we are good leaders at home, work, in the community, and as a business owner:

There are several leadership styles. Authoritarians stand out from a crowd and can be hard to work for. I tend towards a hands-off approach to leadership. I give my people the tools and the authority they need to get the job done. Feedback is always welcome.

As much as I prefer a laid back management style, I understand different circumstances require different leadership methods. When I am undecided I want more input from my team. It almost becomes more democratic in nature when I do this. I prefer not to rely too heavily on the democratic process because leadership is not a democracy; neither is a business.

As mild mannered as I think I am there are some who would disagree. These people felt my wrath usually in the form of a termination over misconduct. The authoritarian leadership style stuns people used to my more laissez faire leadership styel. All I can say is: It is good to keep them on their toes. I only use the authoritarian style when left with no other choice.

Different people require different leadership styles. Highly motivated and talented people are best served by giving them the tools and standing back. A more challenging team may need a firm hand and I am not afraid to use it in these circumstances.

Now it is time to apply the information you learned in each area of your life.

Home: Leadership skills are required everywhere. Years ago I was called to jury duty and, wouldn’t you guess, they made me jury foreman. Never be afraid to step up.

Parents have an awesome responsibility when raising their children. Whether you know it or not, you are engaged in a leadership position. Your kids look up to you long before the world gets their attention unless you sit the tykes in front of a TV and walk away. Even bad parents are leaders with the results you expect from poor leaders.

Both parties to a marriage are in a co-leadership role. In relationships, jobs are generally led by one partner and supported by the other. Sometime you use a democratic leadership style to handle a situation, other times you demand the process. Strong relationships are not harmed by a strong leadership role. Respect is increased by strong leadership skills. Mrs. Accountant makes most of the decisions around the house and I make most the calls involving business and money. Sometimes things go wrong. There are never recriminations. We either lead or support as our role in the matter dictates. Even a supporter can show empathy and encouragement to the leader of a project.

Work: This is from the prospective of an employee. The lowest employee in the company still needs to exert leadership skills, if over no one individual, over themselves. The first taste of a promotion and the accompanying responsibilities also mark the first taste of failed leadership skills. Leadership can be a lonely place to stand. Your personal feelings have nothing to do with your decisions, which are made for the group as a whole. As your ability to inspire other team members to greatness expands, so will your leadership responsibilities. Leaders do not say, “That isn’t my job.” Leaders find a way to get it done.

The hardest part of leadership is building a cohesive team. Personalities will always clash. Your job as leader is to turn the differences into strengths. If a team member is too disruptive or not pulling their weight you need to make the tough call in terminating them from the team. After decades of leadership in my own life I admit differing personalities have caused me the greatest challenges. Sometimes good people just don’t fit on the team and it breaks my heart because their talent and skill will be missed.

Community: You have a responsibility to the community you live in, even if it is a prison cell. The greatest societal failures happened because people did not care enough to take a leadership role in their community. There is a responsibility attached to your membership in a community. Leaders need support and reminding of their duties from the people they serve.

Every community needs people who care. When people disconnect, a community begins to fail. Witness the failure of my community when elected officials and the police absconded their responsibility to the people they serve. A Netflix documentary exposed a dark side to my community and all people there suffered due to the bad press. The illusion my community is a bad place to live is the direct result of those people in a leadership role failing in said role. We have a duty to take responsibility where wrongs are done and act like leaders, guiding our community to higher ground. The work is never done. In my county some of the same people are covering up the truth even when Netflix showed us the truth with our own eyes. Now federal courts are overturning decisions we, as a community, lacked the courage to do on our own. I think we made a difference by installing a new district attorney with integrity. Only time will tell. If more leadership is needed by the citizens we all have a responsibility to take that leadership role.

With all the responsibility a business owner has, it is coupled with great risks to the community. All the goods and services come from business, so do the jobs and a large portion of the tax revenue to run the public portion of the community. All these demands are pulling at the business owner for a larger share. No wonder 9 out of 10 business fail within 5 years. What they don’t tell you is the 1 out of 10 who survive are heavily medicated by the time 5 years pass.

There is nothing like business ownership. The responsibility is large for good reason. Not everyone is cut out to run a business, just like political leaders and police require a special set of skills and a mindset to do the job well. I sometimes hold a flame to the feet of law enforcement, but make no mistake; I fully support the men and women in blue. Without their courageous efforts our community would be anarchy. As much as I support police I also act like a community leader by holding them responsible for their actions, regardless how tough their job is.

Now It Is Your Turn

One short blog post will not turn you into a world class leader. Leaders constantly train and learn. Reading more on leadership is imperative. Learn from the best in your field. Business owners should study Warren Buffett, Steve Jobs, Elon Musk, and The Wealthy Accountant. (Okay, I just wanted to break the tension and see if you were paying attention. Still, you could learn a lot from my successes and failures.) Elected officials should study the best political leaders of history. Police have a responsibility greater than most people appreciate. The news is filled with police actions called into question. Of course we need to hold police officers accountable; we also need to support their work. It is what good leaders do.