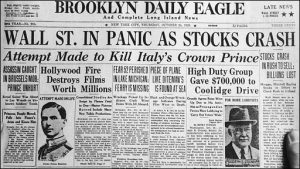 I started investing in Prosper, the micro-lending platform where you can invest as little as $25 on a loan, back in June 2012. By investing a small portion in a large number of loans risk is spread out; no one loan going bad has an outsized effect on performance. I started withdrawing money after the returns plummeted after changes were made to the platform. Because it takes time to collect payments from loans held, it is an illiquid investment. My original investment of $13,400 is still worth $979 after withdrawing $15,430. Not great, but not bad either.

When Lending Club went public I was allowed 200 shares of the IPO (I think, whatever the max was) at the IPO price. I sold within a day or so after it went public for a tidy profit. My opinion (and review of the financials) was investing in loans was better than the stock. My instinct served me well in hindsight.

I continued withdrawing money from Prosper, but did not continue adding to the Lending Club platform because I don’t like the way taxes are handled on these types of accounts. There were plans to have a post on The Wealthy Accountant promoting Lending Club as a viable alternative investment. Something in my gut held me back. I reviewed the financials of the company and tried to figure out how money ran through the system. Something did not make sense to me.

Then on May 6, 2016, Renaud Laplanche, Lending Club’s CEO, was forced to resign due to ethical issues. I did not need to see any more. My auto reinvesting of funds was discontinued and I started pulling my small investment from Lending Club too. So far I have suffered no lose of funds. I only withdrew $1,324 so far and my account value according to Lending Club is still worth around $5,190. Time will tell if I am made whole.

Rarely does one incident end the bloodletting. Laplanche is the face of the micro-lending industry and Lending Club. Some of the ethical issues reported did not pass the sniff test. There had to be more problems lurking below the surface. Bloomberg over the weekend had this report. You can read the lengthy details on your own. My worries were confirmed: where there is smoke there is fire. The stock price is down 80% from its IPO price and the possibility of the company failing is real.

Lending Club has always been a risky alternative investment best used by wealthy investors for a small portion of their portfolio. My maximum investment was $18,400 in micro-lending companies, plus the IPO stock investment I sold quickly after the stock started trading. I could afford to invest more, but I like to invest cautiously. I was always worried by the idea of super high interest rates charged borrowers, plus a loan origination fee. There had to be better alternatives for borrowers.

Greed caused me to invest in Lending Club as a lender. I justified my decision with the knowledge risk would be spread over hundreds of loans and that my investment was very small. I considered Lending Club as part of my mad money investment portfolio.*

Where to From Here?

The damage has been done to the tainted nascent industry. The stock probably continues down and I would not be surprised to see business failures in the industry. Adding money to a Lending Club investment account at this time is a bad idea in my opinion. (But what would I know; I’m only a wealthy accountant.) I encourage my clients to explore a different avenue for their alternative investment money. I am not bashful about telling clients I am withdrawing from Lending Club and Prosper and will continue until the accounts are depleted. I will not return to the industry for a very long time, if ever.

Lending Club is damaged goods. Too many ethical issues have cropped up for me to ever consider Lending Club again. My guess is this all ends badly for investors of the company stock. It is already down ~80%. How much more can it go down? All the way to zero, another 100% decline. No one knows what will really happen. We have seen this story play out before in the stock market. Those who leave the dance early fare best with rare exception.

Lenders on the platform also have risk. You can sell some of the loans you own, but I am not sure how good the secondary market operates since I never used it. The recent news probably has prices lower there too. The loans are illiquid. You only get money back as borrowers make payments. My feeling is lender accounts are secure from the company’s woes. I am personally withdrawing money as borrowers make payments, but will not sell notes. My risk is rather small at this time since I have been running for the door quickly since the first signs of smoke. If you have a large investment it might be worth considering some sales in the secondary market platform offered by Lending Club and Prosper.

The first lesson is to cut and run whenever there are ethics violations involving the CEO or CFO. It is the rare company that comes clean with all the ethical dirt in one disclosure; the board of directors probably doesn’t even know all the dirt and therefore can’t disclose it. Keep in mind this is different than non-ethical violations. An OWI/DWI charged against the CEO is different than an ethical violation. Ethical violations take a lot of digging to get the whole story. When you see smoke, cut tail and leave. You will save yourself a lot of pain and suffering later.

Lending Club, and Prosper to a lesser extent, was too good to be true. These companies offered double digit rates of interest in a negative interest rate world. This is distinctly different from investing in a business where returns on invested capital create value. Borrowing money to people paying 20% or more for personal spending is never a healthy investment. Readers here understand how important it is to spend less than you earn and saving half your income is the norm. I invested in people who spend well beyond their means and now it is time to pay the price for such a stupid decision. I was supporting bad financial decisions and I know better. It is only luck (or the grace of god) that will bail my ass out. I was lucky to start divesting early. Not everyone is as lucky.

Another lesson is always keeping the bulk of your money in broad based index funds. Index funds invest in the biggest and most successful enterprises on the planet. One or two companies might get in trouble, but the group as a whole will weather the storm better than most and do better in the long run. I understand each person needs a tailored investment plan. Traditional investments should comprise the bulk of your portfolio.

Excess risk means exactly that: excess risk. Lending Club was never a low risk venture. The stock’s continual decline after the initial jump after the IPO was a damning sign. Prosper’s declining opportunities and investor returns proved to be the canary in the mine. Don’t be surprised if Prosper and other companies in the industry also air out laundry. I am not accusing Prosper or any other micro-lender of malfeasance. What I am saying is some industry practices will come under greater scrutiny and probably will affect the industry adversely.

We can learn a lot from the currently unfolding Lending Club fiasco. If we learn our lesson and do not repeat the same mistakes we are all the better for it.

Special thanks to Pete at Mr. Money Mustache for tweeting the Bloomberg article, informing me of the latest issues at Lending Club. Pete is updating previous posts or providing a Lending Club update on his blog later this week.

[…] longer recommend these options) to serve as a high-yield investment for such funds. Then we had the Lending Club fiasco I was out the door. Where there is smoke there’s fire. I could be wrong, but I’d rather be […]

One of the things I really like with FI blogs is when they give real number. They could be making it up for all I know, but it helps me plan out real world scenarios anyway. I appreciate that you do this.