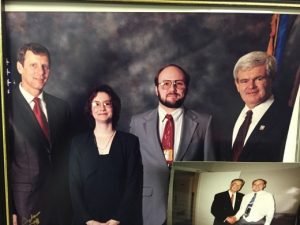 Over the years I have met some truly awesome people. Mrs. Accountant and I used to frequent science fiction conventions and stalk authors I enjoyed reading. You would be surprised how many were thrilled (they acted thrilled) to break bread with the missus and me. Many of my heroes have either died or are getting up in age. I miss Zig Ziglar; I have a picture of me shaking hands with him over breakfast. Tony Robbins was busy as heck but still took time to talk. Beside my office desk I have a picture of me, Mrs. Accountant, Newt Gingrich, and Mark Green. Newt was Speaker of the House at the time and he was promoting his Contract with America. For the record I vote both side of the isle; it just happens the opportunity to have my picture taken with the Speaker of the House came up so I took it. Also sat at a round table with the Speaker and five other people in Green Bay talking politics and taxes.

There are more people I would love to meet. Unless you run in a tight group you may not know many of these folks. It’s okay. You can look them up. Most are writers; writers always thrill me. I met Pete Adeney (Mr. Money Mustache) a few years back and as readers here know I am now his tax guy. The problem with meeting some people is it costs money. Either you need to attend a conference and there is little opportunity to spend any real time with the mark, ah, I mean gentleman, or people like me never have a real chance for a sit-down lunch with the victim because the victim is too famous.

I know you are licking your lips so here is my short list of people I would love to chat with over a beer or a light meal:

Warren Buffett: Warren is one of the most interesting people I can think of. He auctions off a dinner date with him once a year for charity to discuss anything you want. The winner pays over a million dollars for the opportunity. Mere mortals don’t have a chance. The closest I will ever get to Warren Buffett is a client who is board of director for a company financed by Berkshire Hathaway, Buffett’s company. I put this one first because of the 2,500 people who visited this blog in the last month one might have been Warren Buffett. (Yeah, right!)

If Buffett ever allowed me to have personal time with him over a meal I would ask him about happiness. Here is a guy who has lived a long time, made a lot of money, and still seems happier than the day is long. He found meaning in life when all the creature comforts life can offer were never in doubt for a long time. I would ask: What makes it all worthwhile? What makes you proudest?

Stephen King: Over the years I met a lot of writers, including several New York Times bestselling writers. But when you want to sit for twenty minutes with Stephen King you might not get the same reception. He sounds like a great guy to shoot the shit with. He gave up alcohol (my understanding) years ago so a bottle of Coca Cola would do just fine for our conversation. I would ask Stephen about the language and when to break the rules to communicate more accurately. I spend plenty of time writing and struggle. King knows how to push a noun up against a verb; me, not so much. Sometimes I don’t even know I am screwing up grammatically. I would ask Stephen how he knows when to look things up.

If Stephen King ever granted me an audience I would beg “pretty please” to have a tour of his home and office. I am curious how the guy that thinks up such deliciously spine-tingling stories lives. Ah, he’ll never give two shits about a country boy like me. I’m sure I’d be disappointed to learn he puts his pants on one leg at a time anyway.

President Bill Clinton: Now that Hillary leads in the polls it might be time to ask Bill what he plans on doing in the White House with all that free time (Don’t answer that!) President Clinton is an interesting man to me and it goes beyond politics. I would enjoy an afternoon on the ranch with President George W. Bush too, but they have guns down in Texas and Weesconsin boys might not be welcome.

The thing about Bill Clinton is he is sixteen years from his presidency and his wife looks to be heading for the job next round. I would ask Bill (can I call him Bill?) what his proudest accomplishment in office was and what he hopes Hillary would accomplish should she win. Outside the scandal and sex stuff, I would ask what he felt was his greatest error. After the first ten or fifteen minutes and the third beer I would hope the conversation drifted toward the simple pleasures of life like, What makes a good day? Presidents always make for a good afternoon conversation.

Now we move from the impossible to the someday-it-could-happen.

Ryan Holiday: Holiday is a writer with a long career in marketing. He is 29, but is wise well beyond his years. Reading his books you have no idea a young man is writing it; you would think a man with a full life behind him was writing the book. His career started by manipulating the media for his own gain or that of his clients. He has matured.

My questions would be simple for Holiday. He has studied and practiced stoicism from a young age. My questions would be more of a conversation on how to live life well following stoic principles. An afternoon (I would need the full afternoon) would only be the beginning. Holiday is the kind of guy I think I would like to call friend after a heart-felt afternoon of shared ideas.

J.D Roth: You would think this one is possible since Pete Adeney and J.D. are friends. Roth started the blog Get Rich Slowly and now writes for his newest blog, Money Boss. My time with J.D. would revolve around life choices. I have a difficult time letting go of work and career. I would pick his mind for ideas to live a full and meaningful life. J.D. enjoyed a very extended road trip with his family and I would love to hear more (he wrote plenty) about the trip. Not the details of where he went and what he saw, but, how did he handle life away from home for so long? I think a sit-down with J.D. would include Pete, beer, and a lot of shoot-the-shit conversation. Just the way I like it.

Leo Babauta: Leo does not know me from Adam. He writes the blog Zen Habits. I love his work because he helps me do something I have a hard time doing on my own: relaxing. I don’t think readers here understand how little sleep I get. I frequently write these posts late at night and edit them next morning. It is 10:30 P.M. as I write these words. I will go to bed, but I usually sleep on the couch so I don’t disturb Mrs. Accountant. I toss and turn a lot. I get up several times overnight; my mind never stops. Leo’s work has slowly helped me declutter my life.

An afternoon tea with Leo would hopefully help me relax. Of course I could always spend serious money to attend a conference to see him, but it would not be quality time. An afternoon chatting with Leo would probably allow me my first night of full sleep in decades. I would ask Leo how to turn it off. My mind is always racing with ideas. It would be a blessed respite for the voices to stop for just a day. Until then, I’ll keep reading his work.

Tim Ferris: Ferris is the guy who writes the 4-hour books. The 4-Hour Workweek is his most popular work. My question for Tim is simple: What the hell you do with all your free time? For Christ’s sake, when I had fifteen spare minutes one day I bought a farm to fill the wasted time. Life is easy today, no doubt. The amount of work required to satisfy “needs” takes, like Tim Ferris postulates, about 4 hours a week. After that it all goes into investments or stupid spending. Guys like me who need constant activity (constructive and productive activity) to calm the demons needs to know how guys like Ferris pull off the stunt. It sure eludes me.

Now we move to my last “must-see” person I would love to share an afternoon beer with:

You, My Readers: Anybody who suffers through my writing must be special. I love it when I get comments. Everyone sounds so awesome. I can’t meet each and every one of you. I just checked Google Analytics and it tells me 2,568 different people showed up here in the last month. That number has been growing about 50 a day lately; this thing is really starting to take off. As the numbers grow I know my chance to personally touch each and every one of you dims. The sheer volume will eliminate any chance I have of knowing you personally. I hate it with a passion. I am a people-person. I live for the stories people tell about their life. Maybe we get lucky and have a few moments to connect someday. I hope so. Most of you are only a computer screen to me.

And now this post is at an end. I miss you already.

Organize Your Life to Maximize Net Worth and Minimize Taxes

[…] at your event. Stephen Baughier used the most sure-fire method ever. Stephen noticed I wrote a blog post back in August listing some people I would like to meet someday. He checked two people on the list and found JD […]

I've attended conventions where I had a chance to meet some of my favorite actors. I can't help but come away cold from it. Getting 30 seconds to say "Hi, how are you, love your work." just seems completely pointless and unfulfilling. It's not something I aim to recreate anymore. I feel the same as you where I want to sit down with those people and just have a conversation without the press of the crowd.