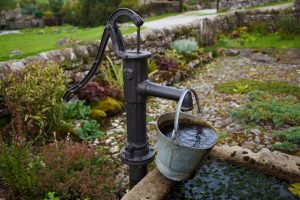 Up by the other place there was a well with an old style pump you worked by hand. Toward the end of our farming days the pump was fitted with an electric motor, but that doesn’t help with our story.

The old well pump up by the other place was a job I hated. Feeding the animals was okay, but getting the tank filled with water was a chore. And a lesson. That old well taught me more about life and success than any seminar or college class I ever attended. The lesson was so simple. It amazes me to this day more people do not understand the lesson of the pump.

That old well was deep. Getting water out of that darn thing prit’ near (yes, I am writing this way intentionally) killed me every day I went over there. The only saving grace is water from wells so deep is ice cold and sweet. There is no water in the world that tastes as good or refreshed as well. Getting the water is the issue.

The job was simple. You started pumping the long handle vigorously, up and down, up and down, up and down. You put your whole body into it. In the summer sweat would pour down my face as I gave it all I had. After several minutes I wanted to quit or at least take a break. But that is a mistake. It takes a long time to get the water flowing. With each pump of the handle the water works a bit higher, but if you stop it goes all the way back down and you have to start all over again.

Everything worthwhile in life works exactly the same way. You put a lot of hard work in with little or no reward in the beginning. My tax practice was no different. This blog is still in its infancy. The Wealthy Accountant got a nice lift-off from a Mr. Money Mustache mention, achieving 8,000 unique users in the first few days. Then the numbers declined and kept declining to 1,600 unique users over the prior 30 days. My publishing schedule was sporadic at first; blame it on tax season and the heavy work load from the Mr. Money Mustache mention.

In early July I started publishing daily with few days missed. My readership grew steadily to just under 3,000 unique users in the prior 30 days according to Google Analytics. Then I needed a break so I could put more research into a few posts. My readers jumped ship fast. They want content! Thirty day trailing page views dropped from 19,849 to 17,743 while unique users went from 2,991 to 2,930. Not a big drop, but totally understandable if you ever worked a hand pump.

Like the pump up by the other place I have to keep pumping if I am ever to get to the reward. The water is part way up the pipe. If I stop the water goes all the way back to the bottom and I have to start over. Only continued effort without much in the way of reward will bring me to my goal.

As I pumped in the humid summer sun I knew if I kept at it long enough the water would start pouring out the spout. Finally the water started to flow. The animals would come running to the fresh cold water. (That is the other lesson of the pump. Stand around like the steers and watch the dumbass human pump his tail off and then come running when the reward shows up. Of course, the downside to this theory is you eventually become what’s for dinner.)

Once the water started flowing I could slow my pumping. All it took was a little steady pressure to keep the water flowing strong. I could reach around with one hand as I pumped with the other to enjoy the crisp, cold water. The rewards kept coming as long as I kept the pressure steady. The workload was reduced when the reward was pouring fastest.

That is how it works in business or any other endeavor. When you work the hardest the rewards are few, but once the rewards start it only takes a small amount of pressure to keep the rewards flowing. Successful blogs can enjoy a less demanding publishing schedule while maintaining readers and revenue. Actually, when the traffic finally starts to explode higher, the revenue rises even faster. The revenue per page view is higher on blogs with 1,000,000 views per month than a blog with only 20,000. There is no reason to complain; it is just the way life works.

Like the pump, a steady pressure is required or eventually the water goes back down. Business is not as hard as many people pretend. I have owned several businesses over the years. Some did well, a few crashed and burned. If you were asking for ‘fair’ you came to the wrong universe. Every success story starts the same way: I worked hard to get the thing going and I was too stubborn to quit. After a while it took off better than I ever imagined. Now the thing is on autopilot; a small amount of effort keeps the whole thing purring. Periodic disasters require an extra level of input for a while until the whole thing starts purring again. Happens the same way every time.

What you don’t hear is: Gee, ya know, I was out walkin’ around and before you know I was CEO of IBM, my investments grew to millions (and I never made any investments!), and I am as popular as I am good-lookin. Okay, you hear people say stuff like that but they have mental illness issues. Even most lottery winners have played a long time before they win the big one (not that I am encouraging such behavior).

There are no formulas to illustrate wealth creation I know of outside business models, so let me introduce the world’s first mathematical formula of personal wealth accumulation:

Remember, you saw it here first. The formula is elegant and beautiful, as the physicists would say. The formula is so simple: Wealth is directly proportional to the effort applied multiplied by the time invested plus intelligent thought and planning. Sitting on your ass all day will not bring you closer to your goals. (Johnny, sit down! I know I sit on my ass all day as an accountant and do very well. You’re messing with my theory.) 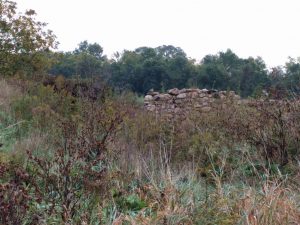 The old barn burned down decades ago, destroying the old hand pump, but not the lessons learned. The pump once lived in this exact spot “up by the other place”.

What are your goals? Do you want to own investment properties that throw off enough cash flow to live on? Are your plans to build a retirement account so you can retire early? Travel plans? Maybe you are crazy insane like yours truly and love building businesses. Whatever gives you bliss, they are all possible.

Even relationships work on the same principle. When I met Mrs. Accountant I had to work hard to win her over; I wasn’t the prize catch she expected. To make matters worse, Mrs. Accountant was engaged to be married two years before meeting me and it was not a pleasant experience when it ended. Just because the world is always fair, the guy that made Mrs. Accountant’s life miserable had the same name as me! You read that right. Mrs. Accountant hesitated because I had the same name her ex-fiancé had. How messed up is that. She couldn’t say my name above a mumble for years after we were married. I understood.

Early in a relationship you need to build rapport. Not much into spending, Mrs. Accountant and I talked at home a lot. We spent considerable time together building our relationship. Once things were awesome we could detach at the hip. Constant and steady efforts keep the relationship awesome without smothering each other.

Starting projects is hard. Really hard. I’ve undertaken many over the years. The story of the pump comes to mind every time. The first time I heard the story of the pump was from Zig Ziglar. It stuck with me and bears repeating, as I have done here.

If you want easy you can leave the room now; I don’t offer easy. What I offer is an honest assessment of reaching your dreams. I get emails daily from accountants who want to know how I did it. They want a magical elixir to eliminate all problems when starting a business. Sorry. That elixir is only found in fairy tales. It takes a special breed to start and run a business. Steve Jobs said running a business is constant worry and that you really need to love what you do because there are times it hurts so much normal people quit. You have to be insane to keep working under such stress and pain with no current income/reward, Jobs continues. Only the insane survive.

It takes that insane effort to build something people later marvel at. If this blog is to grow into something massive numbers of people read and use in their life I need to continue pumping like crazy. After a while, when people see only a steady effort as traffic and revenue keeps pouring in, they will assume it was all so easy. They missed the hard part. When you get really good at something it looks effortless to outsiders. Michael Jordan made it look easy because he practiced and practiced even when he wasn’t getting paid. Then it turned into a steady flow of performance and endorsement deals.

When it is fun during the hard, pumping like mad phase, you have everything you will need to survive and thrive. And then there are the times when no amount of pumping will work. You just move to another well and start again. That is the way life works. That is the lesson of the pump. There will be failures along the way and painful moments no matter how fun or enjoyable the process is for you. Grinding through the difficult times builds the character and endurance necessary to keep the dream alive when things are going great.

Keep pumping. I hear the water from this well is cold and sweet. Enjoy.