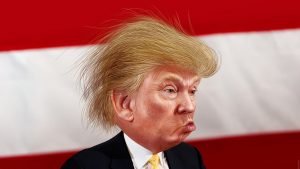 Before you fire up your email to insult my mother’s choice to have children (or congratulate my good taste), here me out. This blog is devoid of politics, trust me. What I share in this post is in no way indicative of who I support for POTUS. This blog is about personal finance, financial independence, lifestyle, and TAXES. Check the top of the page; it is clear as day.

The latest news comes from Trump’s 1995 tax return. I could care less that some people think he is a good businessman who lost $916 million in one year. What bothers me is the mental morons calling Trump’s actions “genius”. Wrong! Or Trump calling his actions “brilliant”. Wrong! By the end of this post I will show you how The Donald threw away $300 million in cash. His accountant should be flayed, quartered, and beheaded for his incompetence. If Donald Trump knew how badly he screwed up on his tax return he would be spitting nails.

I did not see the tax return published in the New York Times. My only information is third party comments in the news. Using such information calls my intelligence into question. But it will provide an awesome example of how we can use the tax code to really save and make money.

This is what looks like happened. Trump started several companies that filed for bankruptcy. He structured these companies as sub chapter S corporations so all the gains and losses flowed to his personal tax return. That is the first problem.

The structure of these businesses are probably why the IRS is auditing him. Deductions exceeded his revenue causes a net operating loss (NOL). This is not unusual. In a simplified way, it means his taxable income dropped below zero due to the business loss on his personal tax return.

NOLs currently are carried back two years and forward twenty. Back in 1995 it was slightly different. (If memory serves, back in 1995, NOLs had to be used in 18 years; three years carried back and 15 forward after the NOL was created. Don’t quote me on that. I’m writing at home without the help of tax guides from 1995.) (I verified the info.) Under current tax law, Trump needed almost a billion dollars in income from 1996 to 2015 or the NOL would expire unused.

The IRS is probably looking at the NOL because the NOL must be reduced by the amount discharged in bankruptcy court. You don’t get to double dip. If Trump tried to ram certain gains through on his tax return prior to the NOL expiring and if he did not reduce the NOL by the amount of debt discharged the IRS has solid footing to audit.

The problem starts with the structure. If Trump organized his businesses as regular corporations, also known as a C corporation, the NOLs would have remained with those corporations. We talked about the tax benefits of S corporations on this blog in the past. My recommendations remain correct for small business owners. For large businesses, like Trump Airlines where I suspect a large part of the NOL originated, the regular corporation is better. There are a lot of reasons why, but we will only focus on the NOL.

C corporations with a NOL have a valuable asset. If another corporation buys the company with a NOL, the acquiring company can use the NOL to offset their taxable income. Since Trump is in New York I will use an estimate of 40% combined federal and state tax rate for C corporations for easy figuring. A $916 million NOL could save an acquiring corporation over $350 million in taxes! If Trump had structured the deal correctly he would have recouped $250 – $300 million from a company willing to buy solely on the value of the NOL, without consideration for any remaining assets, goodwill, or client base.

Time value of money says selling the NOL for cash now beats tax breaks spread over 18 years. The tax breaks will only help if he has income. An acquiring corporation with plenty of profits are sure to benefit sooner than Trump could himself without risk of a partially cancelled NOL. Also, cash in hand is worth more than a possible tax benefit. The risk is shifted to the buyer when the business with the NOL is sold.

Of course, the IRS is fully aware people like the Wealthy Accountant know how this stuff works, even if Trump and his accountants don’t. Section 382 of the Internal Revenue Code (IRC) limits this little trick if 50% or more of a company with a NOL changes ownership. Since the buyer will acquire 100% of Trump’s company with a NOL, the acquiring company will use a formula to determine the amount of NOL they can use each year.

The bottom line is if Trump structured the deal properly he could have cashed in big-time due to the NOL. Big NOLs have value which can increase the amount of money the acquired company’s shareholders get. The best possible outcome would have been $300 million to Trump back in 1995. It is more accurate to say Trump would likely have received closer to $150 million. I guess if you are really rich, $150 million isn’t enough to worry about. It would make a difference for me if anyone cares. 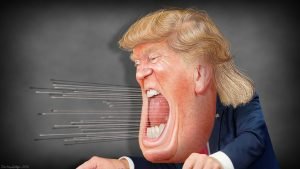 But WA, you said in the past we should have an S corporation for our business. I did and I am correct. I never thought Trump would read my blog and think he is a small business.

Donald worried if he had a profit as a C corporation he would pay more tax. Wrong! General Electric generates billions in profits annually and frequently pays few to no income taxes in the U.S. Trump is so small compared to GE I could handle his whole tax situation myself with one helper. (No kidding! I’d have to quit everything else I do to get the work done, but it is possible.)

Here are a few things Trump could have done if he did it my way. When he had a profit in his C corporation he could use a tax inversion to funnel U.S. profits to a low tax country for usage of the Trump brand. Another neat trick is using the foreign tax credit with the partially tax-free nature of dividends received by a regular corporation. For example: A U.S. C corporation excludes 70% of dividends received from another corporation if they own less than 20% of the stock, a common occurrence. If the C corporation owns British Petroleum it gets the foreign tax credit and the dividend exclusion, a legal form of double dipping. Several years ago a public company used this strategy to reduce its federal taxes to zero and was taken to Tax Court by the IRS. The IRS lost.

A Lesson in Business

Trump is not a good businessman in my opinion; he threw away a couple hundred million due to stupidity. He inherited a sizable amount of wealth and left the bank holding the bag when things soured on business deals; that is where he got his wealth. Trump is good at protecting himself. When it comes to taxes he screws himself more than the IRS ever will. If he played it fast and lose, the IRS will tear him a new one in audit when it never should have been an issue. If he paid me to advise him he wouldn’t have to worry about the NOL; he would have cashed his check twenty years ago.

And no, Donald, I am not accepting new clients.

How can a man,who achieved everything by inheritance,and "by hook and crookj",one who cannot speak in normal gramatical nEglish ,who lied over 30,000 times while in office which he achieved illegaly,be a sucesful businessman?

So YOU are the reason why his financial advisors won't release his taxes, they want to save their bacon. If people start examining their incompetence they will be out of a job.

The Mistake Obama and Trump Both Made

[…] If Trump would have hired me I would have advised a different approach, one that would have given his entire agenda a fighting chance of being passed. […]

[…] I know! Hit’em where it hurts. When with your Republican friends, tell them I think Sean Hannity is a weasel and Fox News is fake news. Tell your conservative friends I think Hillary Clinton would have made the best President in U.S. history. Heck, I even called Trump an idiot! […]

Love the detailed analysis, Keith. Wish you were taking on new clients!