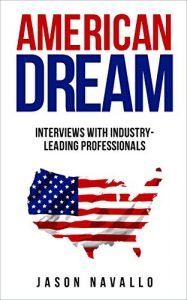 I received an ARC from Jason Navallo, author of American Dream: Interviews with Industry-Leading Professionals. As I suspect with most personal financial bloggers, I get an above average number of requests to review books in advance. Most get put to the side for a later reading, if I get to them at all. American Dream caught my eye because Navello asked politely if I would review the book and he provided a small amount of background in the initial email.

What intrigued me from the beginning is the interview format with six very successful professionals from a variety of unrelated fields. I am a sucker for success stories so I made time to read the book. It blew my mind! American Dream is not a long book which is a good thing because I could not put it down. Navallo used a simple format with each professional. He started by asking each professional interviewed to providing some background on their early life and how they came to lead in the industry they are in. Depending on the path the interview took, he would explore unique characteristics to each professional’s path to success. He ended each interview by asking about their belief in the Power of Attraction, favorite quotes, favorite books, best lesson in life, the key to success, and if they believed the American Dream was dead. The answers surprised me.

Six professionals were interviewed: four men, two women. The interviews begin with Peter Mallouk, the president and chief investment officer of Creative Planning, a firm that manages over $20 billion. Part of this interview branched into investment advice. Readers of this blog will find Mallouk’s interview a great way to start American Dream as it applies to all our personal lives. And, of course, investment planning and personal finance largely overlap.

The next interviewee is Ben Caballero. I know a lot of you people around here love owning real estate. Want to get excited? Caballero sold 2,491 homes worth over $1 billion in 2015 alone! I refuse to break my calculator out and figure how much that is each day; it is too awesome to get my arms around. To top it off, Caballero has over 20,000 lifetime sales worth in excess of $6 billion! Caballero shares his story of how he became such a massive producer. I bet you will be as glued as I was to his story.

Then we turn to B.J. Armstrong. To say Armstrong enjoys basketball is like saying I might like an ice cream. Yes, I like ice cream! Armstrong’s interview is unique in the group. The entire interview is like a pep talk from one of the greatest coaches of all time. He is a passionate and powerful motivator. His style of speaking is also unique. He uses repetition in a way that drills the message into your brain. An intelligent and hard working man you want to read.

Shelly Sun is the first of two women interviewed. Sun is the CEO of Bright Star Care ®. Of all the interviews this one has the lowest tone as you would expect from the leader of a healthcare staffing company. After the first three interviews it was nice to know you could reach massive levels of success without being so high-strung.

I was surprised to see Scott Gerber on the list. From my tax practice I know how profitable bars can be, but this guy takes it to a level I never saw before. All the perceptions of what bar ownership means goes out the window. Gerber runs Gerber Group like a business, the way it should be. Gerber Group currently has 14 venues with somewhere around $50 million in annual sales. How is your tavern doing? You might want to read what Gerber has to say.

Finally, we end with Liz Elting. Elting is in the communications business and the co-founder of TransPerfect. She started her business in 1992 and now revenues exceed half a billion dollars annually! Her business translates languages for legal firms and corporate customers. Her path to an uber-successful, world leading firm is different from most. She is well traveled and saw large parts of the world at a young age.

Different Paths to the Same Endgame

Predicting the path taken to achieve success is impossible as the six successful business leaders listed above attest. Their backgrounds are varied. None inherited a massive nest egg or already viable business; they did it all on their own.

Even their answers to what they considered success varied. Armstrong said he doesn’t need goals while Elting said she is “incredibly goal-oriented”, keeping both long and short-term goals in written form. Some focused on the numbers while Shelly Sun talked a lot about relationships with people they care for.

The one thing throughout the book is how motivational it was. I wanted to get up and get something done with the turn of each page. Everyone interviewed is hyper-productive; they get a lot done in a short period of time and use the extra time to take it to the next level. These professionals filled me with excitement. 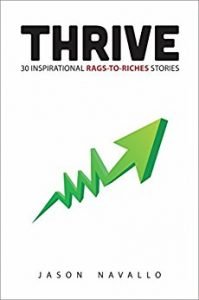 At a time when we hear how America has lost its touch or businesses can’t grow or pay their employees more, we see six people who are doing it in a massive way. Business is hard on a good day. These people do it on a scale we reserve for a select few household names like Steve Jobs, Bill Gates, Elon Musk, or Warren Buffett. For every Elon Musk making the news, a hundred more unsung heroes are doing that and more, building a better American and a greater future. It is about people and these six professionals make that point clear.

Each offered different quotes to live by, and books they would recommend you read. The path to success was different for each and both men and women made the list. Hard work and long hours were a common thread with each one, but all also noted they cut their hours after the initial start-up phase of their company and now have a more balanced life with family, friends, and community.

The most humbling part of this book is the answer each gave to the question: Is the American Dream dead? They all answered no, without a doubt. And I agree. Our best days are in front of us. We have only begun to do great things.

This is why I heartily recommend you purchase and read American Dream: Interviews with Industry-Leading Professionals by: Jason Navallo. The book just came out on Amazon as an e-book. It currently lists at $.99 and free on Kindle Unlimited, affordable for everyone and worth a thousand times more. I assume the price will increase in the near future, but should still be an awesome value. I hope you gain as much value as I did from the wise words of the leading professionals in this book.