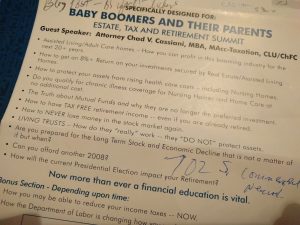 In the United States we have a ritual we put people through age 50 and over. It starts slow and builds momentum. The first indication shows up in the mailbox offering loads of financial information and a FREE! meal. In no time our kind 50 year old has a mailbox full of invitations for free dinners. There are opportunities to screw the Social Security system, opt out taxes, earn huge yields on your investments, and the best ones scream THE SKY IS FALLING!!! and only they can save you.

The answer to each problem, of course, is to invest in what they are selling, usually annuities. I call their bluff and sign up for every free dinner gracing my mailbox. By now I must be the most sought after seminar attendee on Earth. There is a name in the industry for people like me: plate lickers. I love it!

Mrs. Accountant and I rarely go out to eat, but when we do it is usually free. Restaurants I would never try now get scratched off my non-existent bucket list. All because I am a plate licker.

Now before you think ill of me, let me explain. My goal is never to harm the presenter. They offer the free meal and information; all I do is take them up on their offer. If they ever come up with a valuable product I am more than willing to pry open my wallet and blow out the cobwebs.

My dad was born the first year of the baby boom and I was born the last year of the boom. It’s an interesting fact that has nothing to with our story, but something I find interesting. The Baby Boom finally ended because guys discovered coitus interruptus. Child support attorneys have seen declining sales ever since. Back to our story.

As a Baby Boomer I get lots of invites. Tuesday night Mrs. Accountant and I attended one of these free meals/seminars. As always, the food was great. I had high hopes going into this one. The invite promised and 8% return investing in mortgages backed by assisted living homes. I understand the demographic and the profit potential so the idea intrigued me. The vast majority of my money is invested in Vanguard index funds. A few hundred thousand in my portfolio is looking for a home with a fixed rate worth accepting. Eight percent backed by local assisted living homes held promise.

The night went poorly right from the start. The seminar was heavily laced with political opinion which I work hard to avoid. Now it was in my face. Even the food started to smell gamey due to some of the BS I was being served. To protect the guilty I will not mention names.

Before the meal arrived we heard about how old variable, fixed, and index annuities screwed people. I get it. Then the presenter went off the rails. We need to keep gold in a safe at home in case an EMP/nuclear strike ends us. Then he claimed he was really rich and only did this because he loved it. (I understand that part.) It soon was obvious he was not as rich as claimed due to his desire to acquire debt. He was living large. If Mr. Money Mustache were there he would have had an instant coronary.

Then we entered the twilight zone. He started going on about 9/11 and how people could not get ahold of their broker to sell as the market crashed. The new world annuities were better and always available for distributions, unlike the stock market. I bit my lip so hard blood flowed. I was nice. I wanted to say, “Dumbass, ah, I mean sir, I don’t sell when people running around like chickens with their head’s cut off, I actually buy at those times.” Instead, I kept biting my lip and let it pass.

As if things could not get worse, they did. Our presenter, an attorney with plenty of credentials (so he should know better), kept the ball rolling down wind. We were informed mutual funds are no good and no longer a preferred investment. He proved his case by showing how actively managed mutual funds underperform the market over long periods of time. He claimed people were poor because mutual funds have failed us. His proof was how many people reached full retirement age broke. My heart gave out. Once the paramedics applied the paddles I slithered back into my chair. I remained quiet out of politeness. He was wrong! People are not broke because mutual funds failed them; people are broke because they spend too fucking much and never save. Even if people invested in broad, actively managed mutual funds they would still be fine as long they actually saved some money in the darn accounts.

All credibility was lost by the time he reached the part I was interested in: 8% returns on assisted living home mortgages. I lost all trust in the man as I assumed the position. No longer feeling like a Baby Boomer, I felt like a Baby Boober. At least I had a good meal.

Long term stock market returns hover near 7%, plus the rate of inflation, according to the Jeremy Siegel, author of Stocks for the Long Run. Once Treasury bonds reach 8% (a really long time from now) I want some of my money locked into these virtually risk-free investments. Solid investments with a fixed rate of return of 8% piques my interest. I am always concerned when a fixed rate investment promises to outperform its peers by a significant amount. Lending money to an investment group secured by assisted living homes fell within the realm of normal at first glance.

The problem by this stage of the presentation was trust. He interjected so much political drama into his presentation and followed it with facts that were stretched, or at the very least, misleading, I had to take a pass. When you listened carefully, you soon came to the conclusion the guy was leveraged to the hilt. As an attorney he knows how to structure entities to protect himself and maximize fees to his personal account. I am not saying he was doing this, but he could have and my lack of trust in him caused me to walk away without any further consideration. 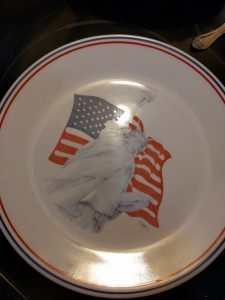 What is the difference between him and me? We both claim to have money. He certainly has an awesome resume; my client list has some impressive people on it. He teaches about money through seminars and selling investments products; I talk money on this blog and with clients. Do you cover your crotch when I speak like I did when he talked? I hope not.

There is a significant difference between him and me. His wealth bragging also indicated he needed a strong stream of cash to fund his lifestyle. For example: He thought it was an awesome deal to pay $600 of interest a year just to use $10,000. He said he would do it all day long. Not me. I use debt very sparingly. When I use debt it is a tool to increase my net worth. Credit cards are my favorite way to get free travel and tax-free cash rewards. I pay the cards in full each month, but technically I am borrowing money for a short term.

When it comes to real estate I borrow money sometimes. My office building hasn’t seen a loan on it since 1999. The only reason I ever had a loan on the office building is because the guy who sold it to me demanded I take a land contract so he could spread out the gain on his taxes. Four or five years later I talked him into taking a lump sum payment and he accepted. The building has been debt free ever since. My personal residence has a mortgage and my excuse is the interest rate is 2.375%. I drag my feet on retiring the mortgage because the dividend yield on the S&P 500 is about the same as my mortgage. It is the only debt I have.

If I wanted to build a large number of assisted living homes, I have the resources and financing capability to do the whole thing on my own. This guy needed me to get the job done (in other words he is really broke) or he was spreading risk because he lacked confidence in the outcome. He paid 8% on his mortgages. He also used multiple (as far as I could tell) LLCs to get investors while circumventing private equity rules. There could be legal issues with this strategy. A few of those issues have visited my office now and again. Attorneys can get into trouble with regulators too. My low level of trust caused me to question his setup as well.

Finally, why is he paying 8%? I am a country accountant with a farming background and I can manage lower cost financing! Something is not right here.

For the geriatric crowd and those nearing my age, you know about all the free dinners to be had. It certainly appeals to our frugal nature if you are willing to sit through a lot of BS. I really thought this time would be different. I really thought I might learn something beneficial this time. It was not to be. I guess I have to settle for being a plate licker.