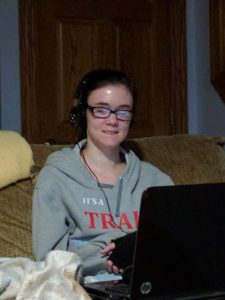 It had to happen sometime and now was that time. As soon as traffic reached a certain level someone would finally say what was on everyone’s mind: Why are you doing it, Mr. Accountant? If you are so damn rich, why do you bust your ass running a tax practice and writing more copy than Stephen King on meth? The answer seems so simple to me, but I have seen this sickness before.

My buddy, Pete, over at Mr. Money Mustache faced similar comments in the past. Now that the guy publishes around two times a month no one is talking, but they all wish he did write more. (Way to go guys!) Recent comments on The Wealthy Accountant have now touched on the subject. The comments are very polite and not derogatory by any means. That is not always the case. The comment in question casts doubt on all personal finance bloggers claiming to have made it. There was doubt the bloggers are really retired. Between the lines you can read “the blogger needs the blog to pay bills”. There were also a few comments protesting the need for a side hustle. I want to set the record straight.

I have no problem as apologist for the “retire early” community of bloggers. I have met many of these fine people and find them to be genuine. There is no fraud, folks. You don’t go into blogging for the money! First you spend a year or more writing your tail off and then only a microscopic number actually turn a profit or any revenue at all. Even fewer make real money. Real world, dear readers. The people writing these blogs are doing it to share their experiences. No more. If it doesn’t hit big it does not mean back to the cubicle; it means, see ya in Tahiti. They are really retired and travel the hell out of the planet.

Side hustles fall into the same category. Filling the day with something you enjoy doesn’t change the fact you are retired. You can only grab yourself for ten, maybe twelve hours a day. After that it’s time to do something else. Rosy has a callus. There is no fraud here either! Turning some coin after you hand in your punch card does not mean you are pulling the wool over everyone’s eyes. (When was the last time you heard that expression? Think they used that one back in the Dark Ages.)

When PayPal was sold to eBay, Elon Musk received $180 million for his portion of the company as co-founder. I think we can all agree $180 million is enough to have fun for a few weeks before heading back to the grind. Right? So why in the blazes did Musk start not one, but three companies: Tesla, Solar City, and SpaceX? The scariest part is he has put his entire net worth on the line.

Another man who could not stop after pushing a stack of cash together was Steve Jobs. In 1985 Jobs was for all intents and purposes forced out of his own company. If they did that to me I’d piss on the grass when I left and would not look back. I would have a serious attitude, to say the least. But not our buddy, Steve! He started a company called Next Inc. which was to eventually be in direct competition with Apple. Sure beats pissing on the grass and never looking back. It gets better. Apple fell on hard times and bought out Next Inc. to get our boy wonder back in the company. What Steve Jobs did from that point until his death is nothing short of miraculous.

Warren Buffett is one of the richest men alive and he still keeps hunting for good companies to buy and expects to turn an above average profit. Bill Gates, good friends with Buffett, stepped back a foot and a half from his company, Microsoft, and dedicated his life to making the world a better place. That’s hard work. So why do it?

I could fill a bookshelf with examples. But the point is already made. Imagine a world where everyone who has had modest success and was able to retire decided to never be productive again. No more Apple, Tesla, or Gates Foundation. It would be a very different world if these people took early retirement as the starting gun to spending a lifetime with Rosy.

When you listen to these people speak it always boils down to the same thing. They enjoy what they do. If early retirement is the goal then why are you not allowed to do what makes you happy once you retire just because if it might make you some money? See how sick this argument gets? I keep running my practice and writing because I like to do it and it makes me happy. There is no fraud or misrepresentation. But there is more.

They say karma is a bitch. I wouldn’t know. I do know there is no mysterious force watching our every move waiting to reward or punish us for every single behavior we have. Karma is more subtle. Karma is not out there; it is in here. She bites you in the ass when you do stupid stuff and rewards you when you take the high road because it is your subconscious working. You do it to you!

I recently wrote a post on my daughter retiring at 22. I expected some traffic from the post, but nothing extraordinary. My goal was to pat my oldest daughter on the back for a job well done. She still looks for a “normal” job; she wants the experience and working in dad’s office a few years did not do it for her. (I wouldn’t work for me either.) Since she was a wee tyke I took virtually every dollar she made and tucked it away in retirement accounts, mostly Roth IRAs. If she earned money working around the farm, in it went. If she worked at the office, in it went. When she worked at my office a few years I demanded she max out the retirement account. We have a SIMPLE plan which allows $13,000 in contributions per year.

Heather has no real expenses. A bit of rent to dad for living at home. (Yeah, I’m an A-hole for charging my kid to live at home. Must need the money so I can’t be retired.) She pays car expenses and any food she wants that we don’t buy. Oh, and she pays for her own cell phone. In short, she lives on almost no money. She does like the library.

Over the years those invested dollars have really grown. She has low living expenses, no student loans or any other debt, and a net worth in the six figures. She is retired. She is a substitute teacher for disabled kids usually one day per week. She volunteers for the same work at other times. And she loves her art. Slowly she is finding a market and a way to grow her art business. You can read that post, linked above, for more details. 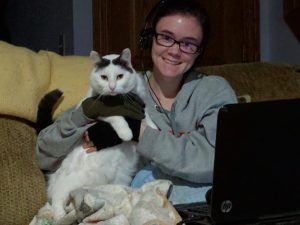 Notice the gloved hands? She is required to wear gloves almost all the time due to Raynaud’s. Her fingers are always in pain.

A few days ago a journalist from MarketWatch contacted me. She wanted to interview my daughter. Heather did not believe me at first. (You would think I joke about this kind of stuff around the house to cause such a response. I am offended by such an accusation.) It took a day to convince Heather to do the interview. Today at 11 a.m. Heather will be interviewed by MarketWatch with me in the room for moral support.

Heather was nervous about what people would think if they knew she had some serious health issues. She also worried about the world finding out about her art. It’s a great dream until somebody notices! Then it gets real. I encouraged Heather to just lay it on the line. You don’t have to say everything, but you can still tell your story. And it’s a good story. How many 22 year old kids can say they don’t have to work because they saved like crazy, have no debt, and the market went up? (The same market you could have been invested in at the same time Heather was.) How many 22 year old kids can follow their dream of creating beautiful art? Now you know why she is special.

Heather is worried about the questions. She doesn’t know exactly how she built her nest egg because I taught (and dictated) from above. She had no choice when she was twelve. I explained what I was doing and only now, at 22, do I see a small glimmer of acknowledgement from her. All part of parenting. Investing is boring, but simple. You drop your money in an index fund and go do something else. You come back when you have more money to add. Back to the art project.

I have a confession. I wanted to scream, “That is my interview!” Well, for about three or four seconds. Then I had to smile. This is not about me; this is about Heather. My girl, my baby, was going to be interviewed by a national press. I wanted to use the interview as another launching board for my blog. So self-centered. And a natural and normal response. But the right thing to do is step back and provide support for Heather and let her take the stage. She is going on 22. Now is the perfect time to learn the skill. Karma is a kind gal when you do the right thing.

Heather has her own blog: Stormy Eye Design. Go check it out. You will find a young woman searching for meaning in life through her art. She can explore that path because I helped her do the right things financially when she was a pre-teen to now. It still doesn’t all make sense to her yet, but she has plenty of time to find her way.

And she has one thing I will never have. Patience. I am always jumping around and hyper. Heather has the patience of an angel. That is why she works with disadvantaged kids. She wants to make a difference. A positive one.

You should link it here if they post an online article!

As soon as MarketWatch publishes I will provide the link.