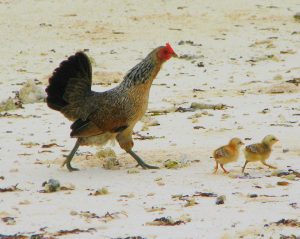 Chicken Little and her children.

Chicken Little is in true form this week as the election in the States surprised many. The headlines this morning on CNBC echo and increasing level of alarm: Anti-Trump Portland Protest Turns Into a Riot; Op-Ed: I’m not worried about a US recession, I’m worried about another Great Depression; Trump’s enemies are already paying the price; Donald Trump tweets about unfair protests — then has second thoughts; An ‘ugly period’ for the market is drawing near: Saxo Bank economist.

I haven’t seen such overreacting since, well, I don’t know when. There is certainly a lot not to like about Trump, but overreacting will not make it better. The stock market is rallying on higher interest rates. Financials are doing well while much of the market is down. Overall we saw a nice rally and it might, or might not, be overdone. Over at CNBC again we hear: Cramer warns the rally is ‘getting out of hand’ —better deals found in the trash. Really! Yeah, the market will pull back at some point and there is no reason for stocks to be higher due to a guy winning an election who hasn’t even started his first day on the job.

Interest rates rising rapidly bear watching and could be a problem for housing and the economy as a whole, but as of now the SKY IS NOT FALLING! There are reasons for concern. Unless you are a white man there has been vitriol spewed toward you from the President-elect over the past few years.

Overreacting solves nothing. Rioting certainly doesn’t. Playing into the hand of violence never works. Taking a proactive approach is the only solution. The people most shocked are the ones who worked so hard campaigning for another candidate. I get it. I’ve worked hard for a long period to watch a project utterly fail. But it wasn’t the end. I learned a lot throughout the process. You need to focus your efforts, using what you learned to facilitate change.

People make America great. The guy with the second highest tally of votes won the Electoral College and the election. It isn’t the first time it has happened. And I bet you have experience working with people of less than the highest caliber. We all have. As frustrating as it can be at times, we need to engage our Stoic training. Complaining and whining is not allowed!

Trump is the President-elect and in January will be sworn in as the 45th President of the United States. This is reality. There is nothing you can do to control the situation in politics at this very moment. So what can you do?

First you acknowledge the only thing you can control: your mind, your response, and your feelings. We have time to look around and assess the situation. If a CNBC commentator is right and we are headed for another Great Depression the only thing you or I can do is take care of ourselves and plan accordingly.

Second, eliminating most debt is now a priority. We do know interest rates are going up because they already have. A CNBC article yesterday said the interest rate increase over the last two days increased the cost of a $200,000 mortgage $28 per month. On a 30 year mortgage that means it now costs $10,080 more to buy a home with a $200,000 mortgage. If you don’t pay it off early. Read the last sentence again. We have known for a long time interest rates would eventually go up. The Federal Reserve printed plenty of money to spark inflation. The likely increased spending under a Trump administration could provide just the spark. Soon we will look back on the good ‘ol days of low inflation and low interest rates. Look on the bright side; your bank balances will earn a return for the first time in years. Debtors will lose. They always do.

Investing in business is the only way to win in the long run. Even business can suffer short-term. People are worried the Affordable Care Act (Obamacare) will go away and worry about paying medical bills and health insurance premiums. Savers find this a minor inconvenience; debtors have some real problems to resolve.

A plan requires some information first. We know there will probably be significantly more government spending in the next few years. This means the economy will expand at first. We also know there is a high probability inflation will ignite and the hangover will be painful. Here is the action plan I am using:

Step 1: No panicking allowed. And no rioting, for Christ’s sake!

Step 2: Stop spending. In this environment you are playing defense. All unnecessary spending is out. Don’t worry about the economy; Trump assures us the federal government will spend plenty enough to make up for any spending cuts we make. Trump is not a fiscal conservative; he is further to the left than Clinton on most issues, except taxation.

Step 3: If interest rates are going up, bond have got to go. Holders of large bond portfolios are going to suffer as they can’t unload huge volumes of bonds in a timely manner. Avoid the rush; get out of bonds now. (Note: Bond prices move inverse to interest rates. When interest rates go down, bonds go up. The reverse also applies. The only bond I would consider holding here in limited quantity are TIPS, inflation adjusted Treasury bonds. I said limited quantity.)

Step 4: The real risk to the US and the economy is a trade war. If Trump causes a trade war there will be few places to hide. But you can’t worry about things that have not happened and you can’t control the outcome anyway. So step 4 is to take a deep breath and stop worrying about all the crazy newscasts. They have to say crazy stuff to get viewer. Don’t waste your life on it. Focus on your behavior and thoughts; it’s the only thing you have control over.

Step 5: Stay the course. Investing excess funds in a diversified index fund is the best way to preserve and grow wealth. Short-term declines are just that, short-term. It is easy to stay true to the program when things look rosy. It is trying times like these that determine your ultimate success. An emotional step now is usually a bad move.

Step 6: Keep a slightly larger emergency fund. I don’t carry an official emergency fund in my financial plan. I usually keep the bulk of my money fully invested at all times. My liquid funds will be slightly higher now and will eventually reach a year’s worth of spending. This is similar to what you do in retirement. Your index funds throw off around 2% in dividends and the liquid cash holding will take you a long time to work through. You can weather a really bad storm for a long time. If you are already retired, a larger portion of your portfolio should be in liquid funds, i.e. money markets or guaranteed bank products. I usually recommend two years of spending as a minimum for people in retirement. A side hustle with income allows you to ease up on the defensive cash investments.

Step 7: Now is the time to channel Mr. Money Mustache and your favorite accountant. Keep your spending low ($30,000 or less annually) so you have resources if things go very wrong.

Step 8: Avoid mass media. The talking heads will cause you undue angst. Most news is disguised commentary with an agenda. Then they break for a commercial. Take a defensive financial posture and then go out and enjoy the weather. It has been awesome lately!

Step 9: Stay alert. In a crisis the hysterical get killed. Those who assess their surroundings can make better decisions. Watch as policy is made in Washington and adjust your financial posture accordingly. There is nothing that should cause you to go 100% cash. You will weather bear markets and be just fine. Interest rates spiking too high or too fast should cause you to lighten up on equities and keep a higher cash level. A trade war is the biggest concern. Most economic issues are transitory, but a trade war could do real damage for an extended period. If bond rates are high enough, some money could find a home if a trade war erupts. Otherwise a money market fund may be the best choice.

Step 10: Get some sleep. You make poor decision when fatigued. I have noticed clients and reader’s emails are stressed lately. The most common comment I get the last few days are: I haven’t slept or I am sleeping poorly. Let it go. It is the only way to relax and get the sleep you need. Cut caffeine from your diet if necessary.

This is not the end. If it is, then it is over. I say that with all seriousness. If the nukes fly there is nothing you or I can do about it. Your worst fear could come true, but the odds are long. Stop comparing Trump to Hitler. There is a major difference. Hitler had a hunger for power; Trump has a hunger for recognition. There is a difference. He might make better decisions to save his own skin than you think. Whether people want to face it or not, Trump is further to left than Clinton on virtually all issues, save taxes. That Democrats are upsets is understandable due to the rhetoric. Why the Republicans are so excited is less obvious. Neither case matters. This is what we have.

Warren Buffett has been a voice of calm when he said this morning the market will be up 10, 20, and 30 years from now if Clinton won the election. It will still be up even with a President Trump. If you want humor you have to reread earlier blog posts here. Now is the time to roll up our sleeves and get serious. Okay, I might drop a joke now and again. Life is too short not to, regardless the situation.

[…] I got the wake up call. I published Overreacting Solves Nothing, where I attempt to calm the crowd after Trump won the election. A few days ago I was called out by […]

Stay the Course with Your Investments | The Wealthy Accountant

[…] A steady investment plan requires a steady hand. A drop in the stock market is not a reason to sell stocks. If anything it is a buying time. A market rocketing higher is dangerous because people place over-extended risky bets in the belief the Kool-Aid will not kill them. If you buy on margin (borrowed money) now, at a market high, you take the risk of a market decline exaggerating your paper loses. Worse, short-term paper losses can turn into permanent losses when you use borrowed money. You can’t be wiped out by a market decline unless you use leverage. (Don’t start with me. If the market drops 100% you are technically wiped out, too, without leverage. That will never happen and here is why.) […]

easy for you say not to overreact, you're white. it's a whole different story for people of color.

I agree 100%, skg! I have a post in the queue with a working title: White Privilege meets Black Pride. What has been holding me back is that I want it to be tasteful and useful. No matter how hard I try I will never know what it feels like to be anything other than white. Maybe I need a kick in the ass to write the post no matter how people respond. Being white automatically puts me at a disadvantage when I write something like that. (One of the few disadvantages white people have in this country.) If I can write a tasteful post I will publish it in the next few weeks. Please comment. Hold me accountable. Call me when I am full of BS; point out where I got it right.