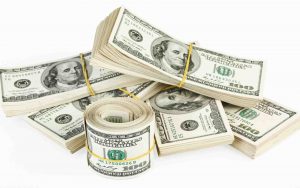 There are two dangerous times in a retirement plan: when things are going really bad and when things are going really good. We have been lucky the last seven and a half years. The market has marched higher at a steady pace with nary a pullback to be seen. There are people in their 20s who have only seen the mildest of market corrections (a decline of 10% or more) and have never seen a bear market (a decline of greater than 20%).

The steady beat higher for so long is unusual. Regular investments have only known one direction: up. Money invested last year is worth more this year, same for the year before that, and so on. It is easy to invest in such an accommodating environment. The goal of early retirement looks so easy when every year is an up year.

Now the election is over and we have seen a serious move higher in the stock market. Bonds have been down more than stocks are up. The rally is narrow. High dividend yielding stocks and growth companies are down significantly. Banks and other financials are drinking the Kool-Aid. For the first time in years I have clients calling and readers emailing me for my opinion on borrowing money to invest in the market. Ahhhhhhh!

Now is not the time to change your investment plan. On a regular basis you should be investing into index funds. Preferable, your investment strategy should be on autopilot. Every paycheck should see a large portion dropped into the investment plan. The level of the market never changes that. Chasing a market when it is higher is a Don Quixote move (look out for the windmills); selling out after the market drops hard is a Chicken Little move.

For the record, we don’t do Don Quixote or Chicken Little around here. We don’t drink the Kool-Aid the crowd is slurping up. Predicting the next 10% or 20% move in the market is nothing more than a guess. The best can’t do it consistently, indicating the ones who do for a short time are temporarily lucky. Luck is a harsh mistress in the investment world.

I can give you a number of reasons why we should dump out of the market: low dividend yields, high P/E ratios, lots of government debt. There are an equal number of reasons to double down in this market: Trump will spend like a drunken sailor (I apologize to any sailor I may have offended), higher interest rates will spur bank profits, and more spending should mean more jobs with higher wages. Each side has a point. At the end of the day one fact remains. The risk is to be out of the market.

A steady investment plan requires a steady hand. A drop in the stock market is not a reason to sell stocks. If anything it is a buying time. A market rocketing higher is dangerous because people place over-extended risky bets in the belief the Kool-Aid will not kill them. If you buy on margin (borrowed money) now, at a market high, you take the risk of a market decline exaggerating your paper loses. Worse, short-term paper losses can turn into permanent losses when you use borrowed money. You can’t be wiped out by a market decline unless you use leverage. (Don’t start with me. If the market drops 100% you are technically wiped out, too, without leverage. That will never happen and here is why.)

How did you grow your portfolio to this point? By making regular investments automatically. When you play with the darn thing the wheels fall off. The computer doesn’t freak out and sell after a crash or buy on margin in the major rally. All the computer knows is to keep chucking more wood onto the pile day after day, week after week, just like the automated plan was set up to do. No emotions involved. Set it and forget it.

My wealthiest clients tend to take a disinterested view of the stock market. They have no idea where the Dow is or if the market has been rallying or collapsing as of late. All she knows is that her automatic investing plan will buy more shares when prices are cheaper and fewer shares when the price is higher. There is no need to fiddle with the equipment. It is working fine. You have a bit more this week than last. So what? It’s just a number.

Deciding to start an investment plan now is peachy! Where the market is today has no bearing on where it will be in 10 or 20 years. (Warren Buffett recently said the market will be higher in 10 and 20 years. The ’ol boy has been right a time or three so we might want to listen.) If the recent rally is your reason to start investing, good for you; if you are a fair weather investor, save your money. If you start an automatic investment plan you MUST stick with it through thick and thin. There are going to be serious down days. And I mean serious. If you can’t set it and forget it, you are doomed.

Exceptions to the Rules

I before E, except after C, and in proper nouns. People spell my first name wrong, a lot. If they remembered the grade school grammar rhyme, my name would never get butchered. Oh, well. Then some smartass asks, “What about ‘society’ and ‘science’?” If you are that guy, please sit down right now.

There are exceptions to the rule when it comes to investing, too. Example: I recommend clients already retired keep a few years of living expenses liquid. There is never a forced need to sell investments to cover living expenses when the liquid fund is always available. Now is a great time, with the stock market higher, to start increasing the value of the liquid portion of the portfolio. Once again, the process should be automated. As long as the market is up, keep taking a select amount to transfer from the index fund to a money market. (Bonds are a really bad idea right now.) 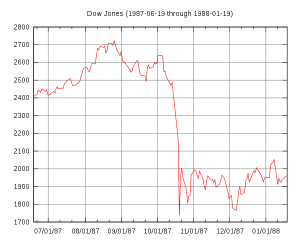 The 1987 stock market crash. Looks scary up close. See the next chart to see how it looks from a historical viewpoint.

There are few other reasons to deviate from the program. I understand some of you have medical issues which may necessitate a change of plan. Other personal matters or an emergency might make changing your investment plan the smart thing to do. I’m good with that. As long as the current trend in the market is not clouding your actions, the decision is acceptable, if not always ideal.

After bragging about my oldest daughter retiring at 22, she was in tears when Donald Trump won the election. She thought her money would all be lost in a market decline. She has a lot to learn. And she learned a big piece of it this week. When the whole world felt the market would collapse over a Trump election victory, the world was wrong. Again. Even your favorite accountant thought a Trump victory would mean a market decline and an awesome buying opportunity. Good thing I don’t trade on my opinion.

Currently I expect more volatility in the market over the political environment. I could be right. But it makes no difference! The only thing to do is stay the course. No borrowing money to plow into an index fund. No selling without a valid reason. The S&P 500 throws off a dividend yield of a whisker over 2% as I write this. Those dividends keep reinvesting and growing like an army without an understanding of stop. Those investments in turn churn out an ever increasing stream of dividends.

And I still make mistakes! I have a SIMPLE IRA plan in my office. Mrs. Accountant and I can contribute $15,500 each per year. I like to wait for a down period to make the most of the annual contribution. Mrs. Accountant and I have $5,000 in each so far this year. I should have spread it out evenly over the year. Instead, I played with my money and now will end up investing in a higher market. Somebody slap my paw and tell me to “Set it and forget it!” I guess I still dollar cost average on an annual basis. 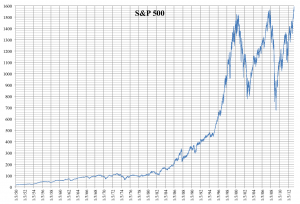 Take a look at a really long-term stock chart. See that little blip in the 80s? That was the big 1987 stock market crash. The Dow was down 22.61% in one day. It was a big deal back then. People all over town were soiling their shorts. Now look at it. It’s so small you might mistake it for fly shit on your computer screen. Forget about timing the market. By year-end I will max out the SIMPLEs and put it in the index fund. No waiting for the magical day I can buy cheaper. It might come; it may never come. If it never comes I lose big. If it does come I will have a speck of fly shit on my screen 20 years down the road. It is not worth it.

Emotions are running high. Whatever your reasons for modifying your investment plan, don’t. A new client informed me before the election he sold all his index funds and put the money into money market funds because the market was too high and if Trump won he would lose. I advised he reconsider that market timing strategy. Now it looks like selling was a bad idea. You can’t time the market accurately.

One thing seems certain. The low volatility market of the last seven years is at an end. We are back to normal. Unless I am wrong. Regardless, timing the market is a fool’s errand. End the stress and anxiety. Don’t watch your portfolio like a cat dancing on a hot tin roof. Each jig and jag of the market is just that, a jig and jag. There is only one way to keep your sanity and maximize your portfolio value: Set it and forget it.

Anyone for a hike?

Welcome aboard, Naps. Glad to have you.

Did somebody call for a smartass? The I before E "rule" is an ancient, weird rule that makes me reach for my caffeinated drink. It has surfeit deficiencies and we as a species should disregard it. But I'm just feisty like that.

We welcome smartasses around here, Adam. Join the herd!

Keith, I was wondering what your thoughts are on company 401K plans that do not offer any index funds. I was wondering if it would be smart to take a big chunk or most of my money out of my company 401K plan and place it in a vanguard retirement index fund? Im fully vested and I will continue to deposit enough in my 401K to get the company match. I've been thinking about doing this for some time. thanks

Steven, I don't think you can move the 401(k) money until you end employment. If you can, great, but I think you have to wait. The alternative to the index fund is growth & income funds. These funds hold stocks of growing companies paying good dividends.Make sure they don't have a lot of bonds. Some do. If that doesn't work, I would consider a growth fund. Hope this helps.

You made a comment about bonds, I was hoping you could detail your thinking about them. I'm still in the accumulation phase and have a small but not insignificant allocation to bonds.

Bonds have an inverse relationship with interest rates; when interest rates rise, bonds decline. Locking in a low low interest rate makes no sense to me and the risks are far higher than the stock market if you use index funds.I encourage you to read more on the subject, Kyle. If time permits, I may publish a smaller weekend post on the subject.