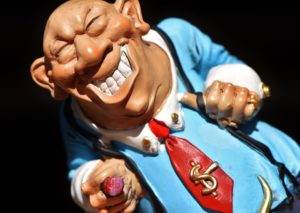 There is an old story on Wall Street about a young stock broker during the Cuban Missile Crisis. The world hung in the balance as President Kennedy came on television to inform the American people 50 Soviet cities were targeted by U.S. nuclear weapons if the Soviets attempted to run the blockade of Cuba.

Those who lived through it say it felt like the world would freeze. Tensions were high. Such threats under such an intense situation could only mean the Soviet Union targeted their nuclear weapons on U.S. cities as well. One misstep, one accident and the human race would end in the flash of an instant.

The stock market started to decline as fear grabbed Wall Street. The young broker started to scream, “Sell!” An old broker with over 40 years experience working next to him barely showed any concern. The old broker touched the young broker on the arm and shook his head. “Buy,” he said calmly.

“Buy! Are you insane! We could be destroyed in a nuclear war!”

Fear and Panic: The Enemies of Wealth

Once again we find ourselves with the real possibility of a nuclear attack. The promise of the end of the Cold War has finally reached an end as massive risks still exist for life on our blue planet. North Korea continues to test ICBMs as they work frantically to build a rocket capable of carrying a nuclear, or even a thermonuclear, warhead to major cities around the Pacific.

Each nuclear test and missile launch sends the markets into a fray.

The whole exercise is pure insanity. If North Korea even twitches with a nuclear tipped ICBM, the U.S. is certain to retaliate. Mutually Assured Destruction (MAD) is back. One miscalculation, one accident could send a series of catastrophic events into motion. How can Russia, with 8,000 nuclear warheads, and China, with 250 nuclear warheads, remain natural when the U.S. retaliates against a North Korean nuclear launch at an American city or one of her allies? It is probably too much to ask the Russians and Chinese to stand pat when U.S. nukes are headed in their direction. It would get out of control quickly.

Each launch and detonation by North Korea ups the stakes. Each weapon is stronger; each missile more advanced. The world is on course for a head-on collision with nuclear weapons involved. Nothing deters Kim Jong Un. History has come full circle. The Cuban Missile Crisis is back, only on the other side of the planet.

Fear and panic are natural responses. It’s easy to connect the dots with no possible way to win. It feels like late October 1962 all over again. The only consolation this time is we take comfort in knowing North Korea doesn’t have thousands of nukes to launch our way. Regardless, one city anywhere hit by a nuclear weapon would be beyond devastating even if it didn’t escalate. The economy would collapse as the world froze.

Crises are nothing new. If it isn’t the Cuban Missile Crisis, it’s the sub-prime mess or a terrorist attack or higher interest rates. Markets are always looking for a boogie man around every corner.

We are very lucky as I write this. We have gone a long time without a serious crisis. It is unheard of in this nation’s history to go an entire decade without a major market calamity. Some would say we are due. Are you ready?

Let’s recap the list of world ending crises of the last 120 years. In 1901 President McKinley was assassinated followed by the Panic of 1907, one of many market panics driving down prices on Wall Street over the centuries.

The next decade brought us World War I. The 1920s started with a recession, but nothing too overwhelming. We almost made it through an entire decade without a calamity until the Smoot-Hawley tariff and the 1929 stock market crash.

The 1930s were consumed by the Great Depression followed by the 1940s occupation with World War II. 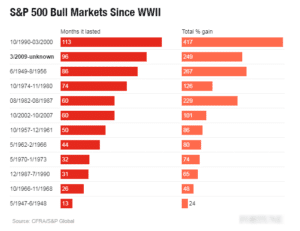 The Korean War (remember that; it’s important later in our story) launched the 1950s followed by an identity crisis for Americans when the Soviet Union launched Sputnik. The nice thing about the 1950s is Mr. Market was happy and content climbing higher at a nice clip. Wall Street seemed content to skip panic selling for at least the 1950s.

Vietnam occupied our minds in the 60s. Then we wanted to feel special in the 1970s by having Watergate, high inflation, oil embargos, American hostages in Iran and a flailing stock market. Sometimes a guy needs something to get the blood flowing.

Who can forget the double digit interest rates of the early 1980s coupled with two debilitating recessions to start the decade? Then things looked up. . . until 1987 when the Dow Jones Industrial Average took it on the chin by the largest one-day percentage drop (22.6%) in history.

The 1990s were pretty quiet. We did get the first Iraq War so we had a wonderful buying opportunity on Wall Street at the beginning of the decade.

Then we start the new millennium with a bang. Terrorist attacks on 9/11 set the tone. Stocks declined by 50%. But once isn’t enough! 2008 was a wonderful time to start a banking crisis due to lax lending standards and housing. This provided another 50% market correction buying opportunity.

After the 2008 crisis didn’t end the world we have been practically straight up. This is currently the second longest bull market in U.S. history. The current bull market is 101 months old on September 9th. People are understandably worried about our good fortune.

There is always something to worry about. The world is always ending. As soon as one predicted date for the end of humanity passes another steps forward. It’s a mindset sure to keep you poor.

Just because we haven’t had a market correction (10%+ decline) or a bear market (20%+ decline) in a while doesn’t mean we are actually due for one. There is no law saying a market decline must happen within a certain timeframe. However, given time, these events will happen again. Some market pullbacks are based on flimsy excuses. Other market declines are connected with political or social events. Either way opportunity awaits. 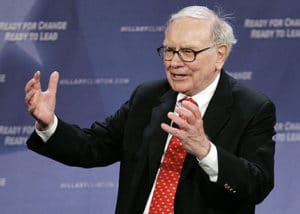 Worry is a waste. Warren Buffett has made a career (and a darn good one at that) by being an eternal optimist. He coined the phrase: Be fearful when others are greedy and greedy when others are fearful.

It takes a special person to pull the trigger on an investment or add to an index fund when the night is darkest. But if you want to succeed at building serious wealth you either must invest in quality companies when they are artificially on sale or invest in index funds and forget it. Time will heal all wounds in a broad-based index fund.

Here is why it always turns out okay. When the economy heads south or an event suggests it will the Fed tends to pump money into the system. More money in the system is eventually going to end up in sales and hence, profits. All companies as an aggregate will reflect all the additional money pumped into the economy. It’s not if, it’s when, stock prices reflect the growing business climate.

Optimists always win. Buffett is the poster child for the optimist of the century. No matter the event, he loudly proclaims things will be fine and then get better. 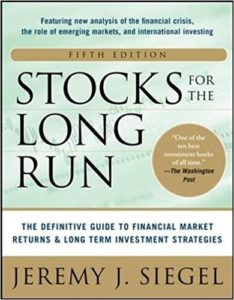 And Buffett has been right though a Great Depression and an 89% DJIA decline, a world war, numerous regional wars, high interest rates, terrorist attacks, a President’s assassination, a President’s resignation over scandal, and banking crises. The market keeps churning higher through it all with only a short hiccup to mark the event on the charts.

All of the wars, turmoil and social unrest, banking collapses, terrorist attacks and economic recessions were only a minor temporary blip in the upward march of equities. Businesses grow and keep growing. And as long as businesses grow, so does their value which eventually is reflected in their listed price.

Now is not the time to be afraid. The days ahead will have scary moments. Threats will be made and the matter in Asia could turn hot with guns blaring.

One thing is certain. The market’s current muted stoic response will give way to panic selling because the world is ending, for real this time. Staying the course and adding to your investments when it looks hopeless is how you will build a massive net worth.

And if I’m wrong the trade won’t clear.

Well said if we all are wiped out it won't matter how much money you lost. I have steadily bought during down times and it has worked out nicely. Stay the course keep investing religiously and one day you to will wake up with a lot of money.