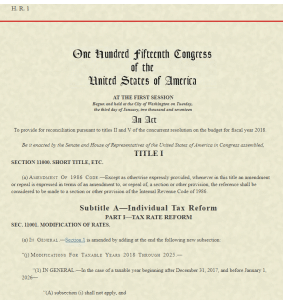 Normally I don’t like to comment on a tax bill before it becomes law, hence the reason I’ve only commented once on the current bill as it wound its way through the halls and committees of Congress. Now that the bill is sitting on the President’s desk awaiting his signature I’m comfortable opening a dialog on some of the issues I see the regular press has missed.

Since the beginning I’ve called this a Swiss cheese tax bill because it has so many holes in it I can drive a truck through with my eyes closed without a worry I’ll hit a wall. I suspect many of these holes will be closed in time. Until then, fuel up the truck fellas. We’re going for a ride.

Pass-through entities don’t pay taxes at the corporate rate, instead, passing certain items, including profits, to the owners to be reported on their personal tax return. Income is generally taxed at ordinary rates.

The deduction is limited to $315,000 of eligible income for married couples and $157,500 for single filers. However, a last minute change greatly enhanced the advantage!

A formula was inserted which will allow the 20% deduction of income on amounts greater than the income limits. The formula for the deduction is the greater of: 1.) 50% of wages, or 2.) 25% of wages, plus 2.5% of the value of qualified property at purchase.

Real estate is the target of this formula. It will allow for massive deductions for certain real estate investors at rates tremendously higher than many other small business owners will get.

But that isn’t what I want to talk about today.

A Load of Swiss Cheese

Traditional news outlets will give you the basics of the tax bill. I’ll touch on the same issues in the near future. For now there is a pressing issue we need to discuss instead.

The above business deduction for pass-through entities makes current year (2017) business deductions more valuable than if taken next year if you are under the income limit! This includes real estate investors where the deduction can be much higher. 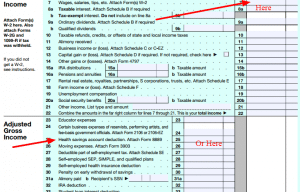 As I read the bill, my interpretation is the deduction extends to sole proprietors and small landlords. When the IRS provides regulations on how the new deduction is handled I may have to give updated advice later. It’s unclear if small landlords and sole proprietors get the deduction without creating a pass-through entity. As I read the bill it is allowed without the extra paperwork. But the IRS may disagree and it might be necessary to hold real estate in a partnership, or if there is only one owner, an S corp. (Gulp! Did I say that?) I’ll keep you up to date. As soon as I have more clarity I’ll pass it along. Either way, there should be a way for owners of income property and sole proprietors to take advantage of the new deduction.

There are two reasons for business owners/landlords to accelerate expenses before year-end: 1.) Tax rates are declining slightly for many individual taxpayers, and 2.) A deduction is worth less next year.

This might seem counter-intuitive, but Congress may have passed a tax bill that discourages pay increases and capital expenditures by small businesses and investors of investment property.

Deducting as much as possible this year makes sense with rates going down in 2018. Buying an asset and expensing it, if possible, is worth more now than it will be in a  week and a half after publication of this post due to the lower rates AND the business income deduction!

An example illustrates the disincentive to invest in more capital expenditures and payroll next year. Suppose we have a small business with $200,000 of profits. If the business is planning an investment in a new piece of equipment costing $50,000, the owner’s tax benefit is reduced by 20% in 2018 and after! It looks like this under the new tax bill:

The equipment cost $50,000, but the reduction in income is only $40,000! The business owner saw a reduction in tax benefits from the increased expense by 20%.

We can debate the method used to deduct the property (expense versus depreciate), but the premise is the same: every business expense is worth 20% less starting January 1, 2018!

If the small business owner REDUCES wages, they are rewarded under the new tax bill! If a business owner cuts payroll by $100,000, she will save payroll taxes AND have a higher income of which 20% is deducted. The $100,000 increase in business income will only have $80,000 subjected to tax.

One last example: Prior to January 1, 2018 it is illegal to deduct 20% of a business’s profits for fake business miles or other non-cash deduction. Starting January 1, 2018 you don’t have to cheat to get the benefit; it’s codified!

Congress has sold this massive tax bill as a job creator. Instead of taking time to get a solid piece of legislation written, they rushed it and it shows.

The incentive to small businesses is clear: CUT PAYROLL! This will have the opposite effect of what was intended.

Sure, businesses will need to spend on updating equipment eventually. But the longer they can hold off the better they will fare; they get a 20% deduction off the top before they spend a penny. A smart small business owner will have more incentive than ever to CUT wages and capital expenditures. And for the altruistic business owner, a tax penalty applies in the form of a reduction in the new business deduction if they do increase wages.

Real estate investors tend to hire fewer people so the effect is less. Even still, spending on improvements entail up to a 20% penalty for each outlay as the business deduction is reduced.

My favorite deductions have always been of the non-cash nature; I get a deduction and keep the money, too.

I hope y’all love Swiss cheese because there will be plenty to go around until they change the tax law.

Note: This is self-serving as all get-out, but this is one simple example of how this tax bill will harm the economy and the workforce, the backbone, of America. If you can see past my self-promotion, spread this post everywhere: social media, email and links. Don’t forget your elected officials in Washington. Don’t be afraid to expand on the consequences of this tax bill. There is plenty to spur the economy. But there is also plenty to slow the economy as well. With small business employing so many people in this country it is imperative to get the word out so the people who can facilitate appropriate change can take action with this new knowledge.

[…] businesses are still punished in a way for raising employee wages. Items I published previously are […]

[…] will cover a wide variety of tax issues that are changing. It will repeat a few facts published here and here […]

If a small business could cut payroll by 20% would not they have already done that? And isn't kind of risky to assume that if I cut my payroll by 20% my income would remain the same?

You've got some good points here, but that example is a little far fetched.

I agree with you, Jim. Employers will probably not increase wages as much if they can help it. Another point to consider: A one-time improvement that replaces an employee is worth more now since 20% of future earning will be excluded regardless if funds are spent unless the tax law is changed.

I used a far-fetched example so it's easier to see. If I would have said employers might shave a bit off the top of wage increases it would have made a muddy example more difficult to understand. It will be easier to see in an equipment purchase and expensing choices. There will also be added incentives for cost-cutting. That isn't always a bad thing.

The interplay on this will be interesting. I predict we will hear more about this as more people realize the cause and effect of the new tax deduction. There are plenty of additional moving part. The ACA also caused businesses to change their behavior. I do NOT predict a large level of layoffs from the tax bill. But with any whiff of a slowing economy employers might be faster to cut employees loose and slower to hire back. And, as I said, technology might be a better choice than flesh and blood as the machine is a one-time cost while an employee is a long-term expense. The employers still gets a 20% deduction once the initial machine cost is absorbed.

For the record, the tax bill already caused my firm to stop new hiring. (We will hire three fewer new staff for the new year and employ technology instead due to the higher after-tax ROI.) New technology was cheaper to employ the last days of 2017 and only 80% of the excess profits are taxed. All I have to watch is the 50% of wages part. But as a tax pro, you know most businesses have payroll high enough to cover the max business income deduction.

ok after further research i see that the wages ur talking about are not the buis owners wages necessarily but the total wages that a co pays. that makes more sense , pls disregard that part of my question/comment .