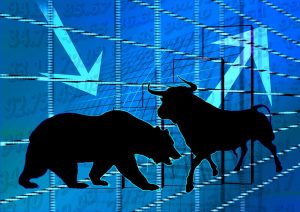 We’re living a spilled milk event as I write. The stock market and the economy have been growing steadily for about eight years now. Constant media covered convinced a large percentage of the population things were dire. We were scared shi+less and tucked our hard-earned money in the mattress. There was no way you would be tricked into investing in a bad economy.

The years kept rolling by as the economy ticked ever higher with the stock market in tow. You not only kept your powder dry, you spent a large portion of it (a 100% loss) and kept the rest in a 0%, or nearly so, bank deposit.

Now the media says everything is good news. The economy and stock market have bent heavy to the left as it heads for the stars.

Tax cuts will stimulate an economy at or near full employment. Things have got to be good. They have to be!

You missed the bitcoin craze, but you refuse to be left behind again. This is it! You’re going to do it. You’re going to jump into this high flying market for your share of the bounty even if you have to borrow to do it.

You might not believe it, but I’ve seen this storyline play out before. The last time we saw tax cuts of this size the DJIA was under 800 (that is NOT a typo). The year was 1981. Inflation and unemployment were both double digits and draconian measures were needed as the economy was heading into the back leg of a double recession.

By 1987 the party was in full swing before a sunny day in October refocused attention on reality. In a few years the market was at new highs again and all was good.

The dotcom bubble — like the Nifty Fifty of the early 1970s — promised a brave new world of ever increasing profits. Then the century turned and so did the market.

The beginning of the current run started in 2009 with people screaming the world was coming to an end and the sky was falling. The ugliness started a year or so earlier.

In each case the market found a bottom, the world went along just fine and the market eventually made new highs.

We had the Nifty Fifty of the 70s, the tax cuts of the 80s, the dotcom world of the late 90s, and the housing bust of 2008. Now we are back to tax cuts, low inflation, low unemployment and a market promising to rise every day as if the Lord promised it himself.

So now you’re ready to invest.

I’m the last guy to tell you to time the market. This thing could rock for longer than anyone expects. What is certain is the day will come when it will stop going up temporarily. That is the day greed turns to fear. And fear is a far more powerful emotion than greed.

If you stayed out the stock market the last ten years I have a suggestion. Don’t invest now! This is not a market timing call either!

The market direction or conditions should have a relatively small bearing on your decision to consistently invest.

After all these years of economic and market growth and only now you think it’s the right time to invest? If this is true you don’t have the temperament to invest in equities (stocks, mutual funds, index funds or ETFs). Buying because everyone is talking about it is insanity!

My granddad was a farmer who saved at an insane rate. The guy tucked away in the neighborhood of 70% of his income. When he hit retirement age his saved half or more of his Social Security check! (You read that right.) He even took a part-time job to fill his days when he was in his 70s and 80s and saved the entire take-home pay!

I always called granddad Doc because he always studied natural healing. Doc is a value lesson in today’s market.

Doc invested about 10% of his money at AAL, now Thrivent, the Lutheran investment house. The rest of his money sat in several banks. He had CDs, money markets, savings accounts and some land.

The 1929 stock market crash was etched into his young mind. He was born in 1922. The Great Depression colored his opinions on money.

Doc understood guaranteed money. Banks offered guarantees up to the FDIC limits. My dad convinced Doc to put at least something in the broad market. Only the investment house connected to the church could be trusted.

Putting money in the bank is not a good way to build your net worth fast. Regardless, he managed a sizable (seven figures) of liquid net worth before the farming world collapsed and he lost most of his money trying to save the family farm.

Undeterred, Doc went back to what he knew worked. He started filling bank accounts again and had another seven figures liquid by the time he died.

To recap, Doc spent a lifetime building a seven figure liquid net worth, lost it in the farming crisis of the early 1980s, kept saving all he earned, put maybe 10% in a rip-roaring market, put the rest into bank deposits and had seven figures liquid again when he died ~ 10 years ago.

People are passionate about the market as I write. Netflix in the last month alone went from 187 to 272. From top to bottom this is a 45% gain. This is rare for any company to accomplish, but even more significant from a company slated to burn up to $4 billion in negative free cash flow this year! 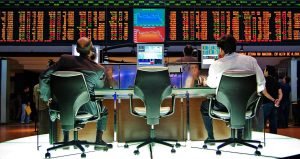 Coupled with the recent bitcoin craze and people are primed for action. It has the feel of a casino! (As a reminder, the house always wins.)

There are only two mistakes that will kill you in the market. The first is getting enticed into buying when everything looks perfect and the market is parabolic. And second, getting scared out of the market when the market is suffering a gut wrenching decline.

Most people fail at investing because they trade the market. Emotions WILL get the best of you if you PLAY the market. Doc knew his emotional readiness and did what any smart man would: put his money in guaranteed bank deposits.

If you’ve been investing a portion of your income every month you have the emotional stability to weather the inevitable storm. (Or the intelligence not to look at your retirement account balance.)

Now is not the time to get brave and jump into the stock market. Even if you use index funds or ETFs. Odds are there will come a day soon when painful reality sets in temporarily. The last thing you want to do is buy now and find yourself waiting a few years for a new market high. Or worse, selling at the low due to fear.

Borrowing money to invest in stocks is the worst! You could find yourself forced to sell as the market declines if you buy with debt. DON’T DO IT!

Missing the current market rally is spilled milk. Chasing the market is a crazy idea. Here are a few dos and don’ts to consider in today’s investing environment:

Young investors have it worst. They haven’t experienced one of these cycles before. The last real market decline was a decade ago!

This isn’t new either. Every 10 -15 years we rinse and repeat. Each cycle is slightly different while humming the same tune.

Investing, even in a hot market, isn’t necessarily a bad idea. Doing crazy stuff and getting greedy is!

No borrowed money for investments in the market! If you have a regular investment plan, keep it. Your investments will ride out the storm when it comes along. If you haven’t invested yet, now is not the time to be brave. Bravery is easy now because the feeling you have is really FEAR you’ll miss out.

The steady hand will always win in the end. Warren Buffett tells us to be fearful when other are greedy and greedy when others are fearful. Greed is rampant now so a healthy dose of fear is warranted.

This is a great point; if people haven't noticed the Bitcoin bubble bursting recently after the massive run of hype in Dec. 2017, they should look at it and take a lesson from that. You're right that it's impossible to predict what's going to happen in the market, but the fact that everybody's talking about how great the market is doing should set off alarm bells.

Joseph Kennedy famously observed that 'when the shoeshine boy gives you stock tips, the market is too popular for its own good,' so he took his money out and ran for the hills (see http://www.exploringmarkets.com/2014/11/how-joe-kennedy-avoided-stock-market.html). I've been getting a similar sort of feeling over the past several months. I don't know when a correction is coming, but I'd bet a severe one will take place in 2018. I hope I'm wrong, but I suppose time will tell...

Best of What's Around. The January Edition - Welcome To Life Of FI MD

[…] bloggers, Keith at The Wealthy Accountant, wrote an excellent article highlighting the need to Steady The Course when new to investing especially in this current bull run. He always has some humor mixed with some […]

I wholeheartedly agree with this sentiment save for the fact I don't think it would be bad for someone to invest, but they do it slowly. They learn. They do, as you pointed out to the one person, pay down debt and dollar cost average. And if they can't stomach losing 10% or 20% then they shouldn't be in the market anyway, at least until they learn. Maybe that involves a balanced fund or something more conservative, but someone should become much more familiar with the market before they invest.

Agreed, excellent advice; however, it's also worth reminding people to rebalance if their asset allocation has gotten out of whack. Take me for example, my equities have drifted 14% higher than planned. Will I succumb to greed and adjust my risk tolerance only to regret it later or will I have the discipline to sell 14% of my equities with the associated capital gains bill? I suspect a large percentage of investors are in the exact same boat.

I agree, Ron. Rebalancing a portfolio is acceptable and not timing the market in my opinion.