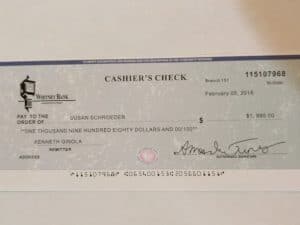 Hey der kind readers. Dis is da welty accountant from way up nort der hey where it gets darn cold in da winnertime. Payin all dos heatin bills is a might painful here in Phuket, Weeesconsin, sometimes known as Nowhere, Weeesconsin so extra side income is always welcome.

Mrs. Accountant does her best to contribute to the family budget by cookin and cleanin whenever the work shows up. She is the kindest thing to ever walk God’s green earth and proves it by sending your favorite accountant with a brown bag lunch to work every day to save money.

She also likes to do surveys online for some extra cash. Well, da udder day she discovered a way to make some real money. I’m not talking small potatoes like selling weed or anything. I’m talkin big time!

She got herself a heck of a side hustle as a secret shopper! Yup. Da missus done got herself some serious job now. And as you can see from da picture of the check above, da missus sure cleaned house (haha, pun intended) with her first job.

I broke da letter into two pictures so you can see what it says easier. I’ll go through the process so you can join in on this awesome side hustle.

First of all, we got da check in da same envelope. Des guys don’t sit on der hands. When dey give instructions dey back it up wit cash!

First thing we had to do was deposit the Cashier’s Check in our bank. Well, right away I knew somethin was wrong. I’ve seen des checks come through the office now and again and know from experience des guys bite off more than they can chew. Sometimes der checks don’t clear right away. Too many secret shoppers, I guess. 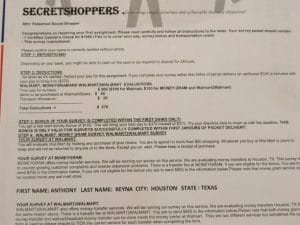 I did some leg work (not the leg work I do at the gym, by the way) to verify des guys were ready to rock. A quick internet search revealed the first problem. Their check had the wrong routing number. Personally, I’d fire da guys who printed the checks wrong!

The next thing I knew was dat Kenneth Ginola guy no longer worked at Whitney Bank. Hard ta chew somebody’s tail if he ain’t der no more! They musta taught I was some stupid country bumpkin.

This wasn’t going to work. Des guys might not mess around, but dey are sloppy as hell. Don’t dey know I can’t send’em money I don’t have?

Well, the bottom half of the letter told us where to send our experience report. Once again it was sloppy work. I sent an email to both addresses provided. They came back undeliverable. No worries, mate. They used an online account to print the postage. I tracked it back to the sender, Jose Ceda.

I called Jose and told him I was excited about da offer he sent da missus, but he might wanna be careful and all with our current President’s dislike for most people named Jose. Just sayin.

I also told Jose about da sloppy work and that I still wanted to work wit da guy if he cleaned up his act.

Before long I knew des guys were bush league. They wanted da missus to send some of da money back with a Moneygram and something called a Walmart2Walmart thingie. I never heard of dis stuff so he explained it to me. 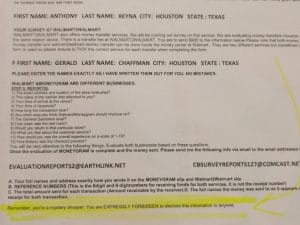 Of course da missus messed it all up. We biked over to Wally World and tried to get the Moneygram to dat Anthony Reyna guy in Houston and the udder guy, Gerald Chaffman, also of Huston.

Ah, it was frustratin as getout. Finally I threw up my hands and walked out and called Jose back. (BTW, he had a very pleasant voice and spoke mighty darn good English for a guy from Eastern Europe.) Anywho, I finally convinced Jose to just give me his banking info so I could wire him his money back. I never saw a guy so happy to get out of a deal in my life.

He gave me da bank info. After hanging up da phone I decided it would be da Christian thing to do to still try to get dis to work. After all, we did give our word and we still had the cashier’s check.

Wat I did was use Jose’s bank info and ACHed da money outta his account and into mine. Strange how smooth money transfers when you get all da numbers right. You can always trust your friendly accountant to get da job done.

As you can see from da letter, we are supposed to keep $270 for ourself, $370 if we get da job done in a day. Well, all da dickin around took more than a day, but I said f@*ck’em, figuring da missus deserved da bonus for all the extra work we did.

Before we could send Jose some of his money back we got an email from Jose. (It still amazes me how much stuff they know about a guy these days.) Jose was upset we withdrew $1,980 from his account instead of depositing it. All I can say is he wasn’t as excited as he was before.

The madder he got the more Russian he sounded. I promised Jose I’d personally see to it da missus would complete the secret shopper assignment.

We didn’t actually return to Wally World, but figured we could just make some of it up since Wally World is the only place to buy supplies for a hundert miles in any direction. (Welcome to Phuket!)

I sat down with da missus and worked through the twelve questions we were supposed ta answer. Most of da questions were stupid. Darn near got in trouble when I knew the name of the cute cashier over at Wally World. Dang Jose.

Question 8 was also a problem. Ya see, in backwoods Weesconsin we rarely use the restroom facilities. Normally we just walk out behind Wally World when we need to water the horse.

When I got done sendin Jose the answers to his questions I decided it was such a hassle I wasn’t going to send Moneygrams or other such crazy stuff. I kept the money! I know it’s not da Christian thing to do and all, but for the record I haven’t been to church in God knows how long. (Actually, God might have a hard time remembering the last time I visited for dinner.)

One last thing. I highlighted in yellow the last message on the secret shopper instructions. I am EXPRESSLY FORBIDDEN to disclose this information to anyone.

I won’t tell anyone if you don’t.

Time to Get Serious

Kind readers, I made a joke out of a serious issue harming numerous people every day. Mrs. Accountant does surveys and recently did a few secret shopper projects.

The letter, check and mailing label above all showed up a few weeks ago. We think it came from a Swagbucks offer.

Normally I throw stuff like this out, but decided to write about it. I could have explained the situation and ended with saying, “DON’T!” Instead, I wanted to take a different approach. We are constantly warned of these types of scams. The fact that they are still active means they probably work and many people are getting hurt!

The story above is made up. I took the situation and turned it into a joke. However, it’s no joke to those victimized by these criminals.

There is no doubt in my mind the cashier’s check is bogus. Because I’m writing a blog post I did some research. There really is a Whitney Bank on Johnston Street! But the check is bogus. The check is printed on check stock you can buy online or at Office Depot. A quick call to the bank and it becomes clear this is a scam.

The poor and elderly are most vulnerable. The people least able to suffer the loss are the best target for these scumbags.

Here is how the scam works in a nutshell. They send you a cashier’s check with instructions to deposit the check at your bank, withdraw the money and forward some of the money to the scammer via some type of wire transfer. They tell you to keep a portion as your reward. Later you discover the cashier’s check was bogus and you are out the money.

Today in the office (I’m writing this the day before publication) a client came in with a stack of papers, victim to a similar type of scam. In his case it was a new client of his business who needed extra cash so they used their credit card to withdraw money. They then sent it to another bank account. Later the credit card was discovered stolen and they are now out the money.

If you ever see anyone in a situation where they are asked to deposit a check or credit card payment and send the money to another account, please stop them and call the police.

Have a serious talk with elderly parents and grandparents. Talk to your children. Warn friends and family of the signs something isn’t right. There is no reason to take a check, credit card or any other means of payment and forward it to another account. Ever!

If anyone you know thinks this kind of thing is legitimate, yell at them at the top of your voice,

I just got $2,930 dollars for a secret shopper job I was gonna do it this morning of March 18,2021 I'm excited to be making $450 dollars just as soon I get to my bank some how I got this feeling that something is wrong about the gift cards worth $2,400 n some cashier check I need to purchase and send to them n it's good I did some research first I almost fall victim to this kind of scam

I Absolutely Laughed this Entire story,, I found it hilarious!!! It's so sad how these scammers prey on victim's!!! I. Just saw a scam like this, but the scammers wanted you to purchase two Walmart. Gift Cards at two different. Locations $500 each card. Scratch Card, Take Pictures. N email or text to a number.😳😳😳

I work at a major retail chain that houses money transfer station...We are regularly warning/stopping people from sending money on one of these scams. Good post

Ruby @ A Journey We Love

I'm a secret shopper myself and I was like there is no way I could get that much shopping for someone in one go! lol. The most I got was around $100 in a month and that was covering an assignment or two per week for 4 weeks!

The clickbait accountant strikes again, Ruby! I had to make a point if I was going to convince people NOT TO FALL FOR THE SCAM! Too many people get hurt by these scams. Hopefully my work reduces the victim count by at least one.

Great post! I have worked in a bank managing the tellers for the last several years and we see these scams almost on the daily! It's really sad how hard people work to victimize others! As soon as I saw that picture I began to read more quickly because I knew right away it was fake and was relieved to see you quickly came to the same conclusion! haha. Hopefully many more people read this and protect themselves!